Tis been a couple of months since out last update, so its kinda high time for a new one.

There is some news regarding the Kickstarter, chiefly how things are progressing on that front. There has also been some movement on the Cold War Skirmishes front as well. Finally, reports on the deployment of Utherwald Press later in the year. 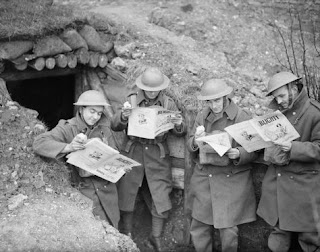 The bulk of the artwork for Frozen Skies is done, just waiting on a handful of pieces which have been delayed. Hoping that these final pieces will be completed in the next week or so, potentially allowing us to finalize the PDF by mid to late April time. If all goes well we may even be lucky enough to start shipping rewards early, it just depends on how things go.

The draft version of Act One of the Kickstarter exclusive adventure 'The Remmants of the Past' has already been shared with backers and work on Act Two should begin soon. Envisioning at least three parts to the adventure, which will be turned into a PDF once completed.

A week ago I released a fan made adventure called 'Operation Thule', a Weird Wars style adventure set during the Falklands Conflict. The response to it seems positive, so I'll look into doing a fuller CWS book on that conflict.

For those who've not yet seen the adventure, the link can be found here; https://drive.google.com/open?id=1fa4WgFiR1pLMhJjlPBatvauJxnmFzA1W

Diceni, Norwich - 6th May -  Didn't get a stand, but Utherwald Press may still be there.

UK Games Expo - The logistics for UKGE this year haven't worked out, but maybe next year.

NOR-CON - This one is still on the cards.
Posted by Stephen 'Stormwell' Hughes at 00:39 No comments:

This week we're doing something a little different for Cold War Skirmishes, we're gonna try and stat up an aircraft.

Our candidate is the Blackburn Buccaneer, a British carrier-borne attack aircraft designed in the 1950s for the Royal Navy to counter a new generation of Soviet warships. Used by the Fleet Air Arm, RAF and South African Air Force seeing combat action in both the Gulf War of 1991 and the South African Border War. They also put in appearances at the US' Exercise RED FLAG from 1977 through to 1983.

The Buccaneer (or 'Bucc' as it was nicknamed) was designed from the outset to fly at low-level in order to approach enemy ships' below their radar horizon, keeping the engagement to less than a minute before quickly flying out of range whilst its weapons struck. Following the demise of the Royal Navy's fleet carriers in the 1970s, a number of Buccaneers were transferred to the RAF where they were used in the maritime strike role as well as the overland strike role with RAF Germany. In 1972, Buccaneers of 809 Naval Air Squadron operating from HMS Ark Royal took part in a 1,500 miles (2,400 km) mission to show a military presence over British Honduras (now Belize) shortly before its independence, to deter a possible Guatemalan invasion. Other missions include supporting British peacekeepers in Lebanon in 1983 and then operations against Iraqi forces in the 1991 Gulf War, the latter conflict saw the aircraft being fitted with designator pods for laser-guided bombs.

The only other operator of the Buccaneer was the South African Air Force which acquired 16 aircraft in 1963, though further orders were blocked by Harold Wilson's Labour government in the late 1960s. The South African Buccaneers, like their British counterparts, were used in both the maritime and overland strike roles. SAAF Buccaneers saw active combat service in the 1970s and 1980s during the South African Border War, often flying close air support missions. Its ability to carry heavy loads over long ranges, in addition to being able to loiter far longer than other aircraft, made it ideal for the CAS role.

The Buccaneer featured a large internal bomb bay, capable of carrying a wide-range of conventional and nuclear weapons, plus four external weapons mounting points. The bomb bay itself rotated as traditional bomb bay doors could not be safely opened into the air stream at low levels and high speeds. Additionally the bomb bay could be configured to carry a fuel tank and many Buccaneers were used as 'buddy tankers' to refuel other aircraft. The hard points could carry bombs, missiles, rockets, fuel tanks or other equipment like flares, later development introduced electronic warfare and laser designator pods.

Over its service life, the Buccaneer carried a range of self-defence systems. Early systems included chaff and flare ejectors, but later on ECM pods and radar warning receivers were fitted. Sidewinder missiles were another later addition, typically appearing on at least one aircraft in a 'Battle Formation' of up to six aircraft. A truly unique defence system for the Buccaneer was known as 'retard defence' which came about by accident. During an early Ex RED FLAG a Buccaneer was being pursued by a particularly determined F5 at low level and the Buccaneer pilot decided to drop one of his practice bombs, which proved enough to scare the F5 off. Post-sorted video analysis showed that if the bomb had been a real bomb, then the F5 would've been blown out of the sky by the debris. It quickly became standard practice for Buccaneers to carry four retard bombs in their bomb bays for 'air defence', which was called 'Retard Defence' and had the advantage that these weapons could be used if a target of opportunity was spotted whilst on a mission.

Recently took a break from Frozen Skies related topics and did a Cold War Skirmishes installment, one that seems to have been hugely popular. So this week figured I would discuss the current plans for the Cold War Skirmishes line. Basically covering what is being worked on and whats in the pipeline for the future. 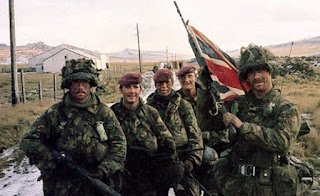 I've already teased an adventure called Operation THULE which is set during the Falklands Conflict.

Op THULE is intended to be a Weird Wars style adventure that will see the characters going up against a Chupacabra ('goat sucker' in English) and a German commando who fought in WW2. It is going to be released as a Fan product, partially as 'proof of concept' and partially because my resources are limited until after Frozen Skies is finally released. Going by the tease alone it looks like it may get a positive response.

If Op THULE does well then I'll see about producing something that covers the Falklands Conflict as a whole. Already plan to include a timeline, outline of battles, gear, NPC stats and some suggested Weird Wars style elements in addition to those for a more conventional military campaign. Thankfully, a good chunk of the legwork for this has already been done.

I've mentioned previously that I wish to do a CWS book that covers and the Australians and New Zealanders in the Vietnam War. My intention is still to produce this book, though not sure whether it'll be before or after the Falklands one but both will follow a similar format.

After the Falklands and/or ANZAC books are done I'll look at doing the first of the 'national' books that will cover a nation's military during the Cold War period. First up, since its the one I know the most about, will be one about the British Armed Forces. Then I'll move on to cover other nations and do linked 'conflict' books, but I don't have a particular order in mind. The US and Soviet books are obviously going to be the big ones, but the smaller nations are going to be interesting to do depending on ease of research.
Posted by Stephen 'Stormwell' Hughes at 02:51 No comments:

This week we take a break from Frozen Skies and do a Cold War Skirmishes installment.

We'll be taking a look at the Sterling SMG, the British Army's submachine gun that served alongside the L1A1 SLR for much of the Cold War period. It was used by a number of other countries in a number of different conflicts (including both sides of the Falklands War). Star Wars fans may recognize the Sterling as being the basis for the blaster used by Imperial Stormtroopers in the Original Trilogy.

As ever, brief overview of the weapon and modifications/variants.

The Sterling SMG was developed during the latter years of WW2 as a potential replacement for the famous Sten Gun and was even used in combat by British airborne troops before the end of the war. However, it wasn't until 1951 that it was decided that the Sterling would be adopted as the new SMG of the British Army.

There would be a number of different variants of the Sterling, though model changes were minimal throughout its development life. Variants include a suppressed version and a version chambered for 7.62x51mm NATO rounds intended to be used as an emergency standby weapon in case of attack during the Cold War. Canada, Chile and India produced their own licensed versions of the Sterling, the Indian versions are still in production for use by the Indian Armed Forces.

The Sterling also could fit a bayonet of similar design as that of the SLR, though it was rarely employed other than for ceremonial duties. The bayonet stats in the Savage Worlds rulebook would work just fine.

Suppressed Variant:- -4 penalty on listen based Notice rolls to hear weapon being fired.