The Airman's Gazetteer: The Coalition

The Airman's Gazetteer series continues with a look at the Coalition, a nation ruled over by merchants and corporate entities.

This is also the final blog post of 2017; with the next two weeks being Christmas and New Years respectively normal service will resume on Monday 8th Jan. A two week long break will hopefully mean fair progress will be made on the Kickstarter related content. In the mean time, Happy Holidays for whatever you celebrate at this time of the year. 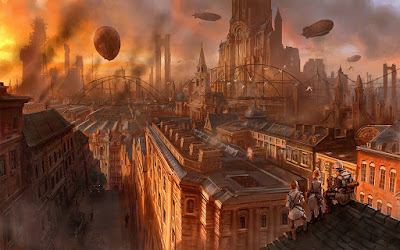 The Coalition was once the United Provinces and lies to the west and south of the Tyland Free State. Like alot of other nations, the Coalition is a radically different nation to what it was when the Great Darmonican War started. The United Provinces was a nation who's lifeblood was trade and coin flowed freely, drawing traders and mercenaries alike. Mercenaries in particular did well on United Provinces contracts guarding trade convoys, especially when the war broke out.

The United Provinces' last ruler, King Francis IV, constantly worried about his nation being dragged into the conflict and placed restrictions on the export of war materials. The King reasoned long as his nation sold basic foodstuffs and some luxury goods to the various warring factions then he couldn't be accused of favouring any particular side. Problem was that a number of rich merchants and big businesses, whom effectively controlled the United Provinces Council (the nation's legislative body), didn't see it that way. The Council passed a Motion of No Confidence in the King and effectively exiled him. The Council also removed the King's restrictions on exports and some business regulations to improve the profit margins of the business interests that backed the Council.

These days the Coalition is a highly capitalistic nation where all the power resides in the various corporations that still hold sway over the Council. Factories and worker's tenant blocks, plastered with corporate posters, dominate the various towns and cities. Rural areas tend to be filled with either corporation own farms or the country estates of high ranking managers. Small businesses exist, though are connected to the big corporations one way or another. The more independent entities tends to be shopkeepers, though even they have to do business on the corporations' terms.

Each corporation has its own militia and agents to protect its interests, especially interests that lie outside of the Coalition. There are a few 'national' organisations such as the police and military. The Coalition Police perform the same job as their counterparts in other nations, though cases and/or crimes that affect a corporation tends to be handled by that corporation. The military is split into three branches; army, navy and air force. It is tasked with defending the Coalition, though some corporations think that extends to safeguarding their assets and some even have high ranking officers on their payroll. Other organisations of note include the External Audit Department which acts as a national intelligence service and the Assets Retention Bureau that recovers stolen Coalition property.

Every day life in the Coalition is comparable to other nations, though money and, to a degree, skill plays a part in your standing in society. There is a basic education system designed to ensure that the lower classes/workers are able to read, write and follow instructions. For those from the lower classes that prove to be gifted there are colleges where they can learn more technical skills for specialist trades. Children of management level citizens receive a much higher standard of education which includes preparing them for leadership roles, they also have guaranteed places for universities. Those from less well off background can still go to university, though typically it requires getting a scholarship.
Posted by Stephen 'Stormwell' Hughes at 15:14 No comments:

After looking at the Iron Collective last week, we now head south to the Union of Sodkan Republics; a loose alliance of small nations paranoid both by their big neighbour to the north and each other. They argue to be the successors to the Holy Sodkan Empire, something the rest of Darmonica is happy to accept. Though, many doubt how well the Union will stand when the Iron Guard march south. 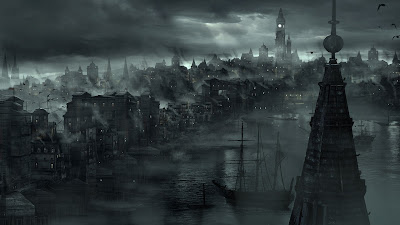 As stated above, the Union is a loose alliance of small nations that have branded together out of fear of their large neighbour to the north; the Iron Collective.

These same nations were once part of the Holy Sodkan Empire and claim to be the successors to it, which the Iron Collective has yet to contest. Though they distrust each other as much as they do their big neighbour, which makes co-operation difficult at best. For the most part the Empire kept them in line, but with that authority now gone they are prone to infighting and border skirmishes aren't uncommon.

They are relatively poor, all have suffered economically since the Empire's collapse and they have a limited chance when it comes to foreign trade since the Artian Confederation sits on or close to their major trade route. The Union had a strong mining industry, though that was directed towards feeding the old Empire's need for resources. It does process a light industrial base with a handful of factories, something the Union is seeking to address in addition to reorganizing its rail network. Both projects suffer from the bickering of the various republics and little progress has been made on either.

Each republic has its government and each send representatives to the Assembly, the joint decision making body of the Union. Each republic also maintains its own military, though thankfully these were originally equipped and organised by the Empire so they generally follow the same standard. The Assembly has little control over the republics and their respective armies, its really a chamber where the republics can agree on a general course of action and hope everyone goes along with it. The Assembly has no power to deal with the disputes that arise between the republics and often result in border skirmishes, the overriding fear of the Iron Collective is probably the only thing that stops these border skirmishes from escalating.

Recently the skyships of the Iron Fleet (the Iron Collective's air force) have been making incursions into the Union, the republics only have gasbag style airships and obsolete aircraft to counter these incursions. Many are fearful that these incursions are the prelude to invasion, especially since units of the Iron Guard have been reported in certain remote areas. Though these Iron Guard units don't stay long and their activity suggests that they're looking for something.
Posted by Stephen 'Stormwell' Hughes at 15:46 No comments:

The Airman's Gazetteer: The Iron Collective

This week we return to the Airman's Gazetteer with a look at a nation that's already been extensively covered; the Iron Collective.

This isolationist, technological theocracy is viewed with a great deal of wariness by the other nations of Darmonica. It has refused to maintain any diplomatic relation. Its goals and motives are unknown, the regime refuses to let any of its citizens be exposed to any external influence. All everyone can do is keep a close eye on the Iron Collective. 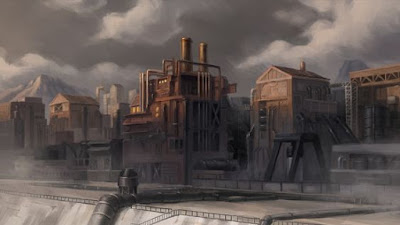 Every aspect of life within the Iron Collective is dominated by the Order of the Great Machine, originally an offshoot of the Cult of the Great Maker. The Order views society as being one, gigantic machine with every man, woman and child forming an intricate part of that machine by having their own particular roles to play. To achieve this end, the Order has completely rebuilt Sodkan society from the ground up. Families no longer exist, instead the State pairs people up and gives them a quota of children to produce. The pairings and quotas are dependent on various factors such as local population, required traits, etc. All this is administrated under the State Bureau of Social Affairs and Development, which also collects genetic samples from every citizen to analyse and to keep on record.

Children typically stay with their parents until they turn five years old, at which point they are taken and placed in a state academy. They complete their 'Primary Phase' education which ensures that they're educated to a reasonable standard in addition to being continuously assessed. These assessments come into play when the child turns 13 and starts their 'Secondary Phase' of education, this is when they receive their Classification and directed towards a certain trade. The trade chosen is based on the Primary Phase assessments and is considered to be what the particular will be best suited for. They will then be sent to specialized academies for the chosen trade to do their Secondary Phase education. The trade, and Classification, is permanent and isn't normally allowed to be changed. Though before starting Secondary Phase education a person can petition for a certain trade, but must complete a more vigorous assessment to prove that trade is suitable for them.

Crime is punished by Declassification, effectively a revoking of a person's rights as a citizen. They cannot collect their state rations, cannot receive healthcare and cannot get what is considered to be a 'legal' job. The Declassified tend to wind up either in state labour camps or forced to seek refuge in the fringes of society. There are also what is known as the Unclassified which are spilt into two broad categories. The first category is those who fail their Primary Phase, basically their assessments were too inconclusive to assign a trade. The other category is 'non-citizens', basically those who aren't in the system. Their status is similar to the Declassified, but they do have a greater freedom of movement within the Collective and can apply for state 'work for benefits' programmes to gain access to basic rations and healthcare. Both groups tend to form the Iron Collective's criminal underworld, they are also the ones that are more likely to deal with outsiders.

The Collective has no currency, people work assigned jobs to receive rations and other state benefits. Though bartering does occur, but that tends to be in areas away from the central authority. Despite it being illegal, some people do trade with other nations but they have to use that nation's currency in order to do so. Non-Classified citizens have an easier time of this than their Classified cousins, the Unclassified in particular who can move around more freely and tend to form the bulk of the traders who operate out of the Collective. The Iron Guard, the state's combined military and police force, does try to clamp down on the cross-border trading but border duties tend to be fulfilled by the Unclassified who sign on as auxiliaries and are more willing to turn a blind eye. The central authority has slowly been expanding its reach and important border settlements now have a detachment of Regulators, the Collective's secret police.

The biggest shock to outsiders entering the Collective is the efforts being remade to rebuild the entire country on a so-called 'grid pattern'. Settlements have been razed and then rebuilt on a grid layout with future expansion planned to keep inline with this. Roads, railways and even rivers have been rerouted to form straight lines. This gets more noticeable as you travel deep into the heart of the Collective, but even the border regions aren't completely immune from this. The stated reason is 'too improve efficiency', but many fear a much more darker reason.
Posted by Stephen 'Stormwell' Hughes at 23:28 No comments: