This month's post was prompted in part by a rethink of the relationship between skyships and airships in Frozen Skies and in part by a suggestion by user MicaMoo on the Unofficial Savage Worlds Discord. Hopefully this will ultimately expand couple of aspects of the setting and give one or two things greater importance within the world. Overall, something that adds to the setting. 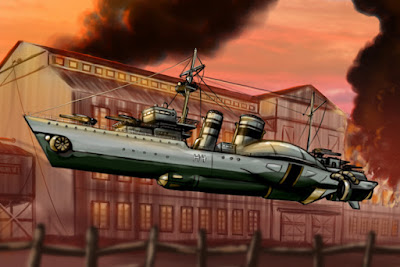 Masters of the Sky

I've already written about the Skywright's Guild, how I've stated that the Guild is the largest builder and operator of aero-vessels in Damonica. This is something I'm going to keep for the most part, though I'm making some changes in relation to the proposed changes to technology behind the skyships.

I'm looking at going with a device known as an Aero-Lift Engine (ALE) that derived from Ancient technology and is used to produce lift for skyships. Thinking the Guild managed to stumble upon an Ancient skyship and reverse-engineered some of it's technology in order to create the first ALEs, thus allowing the Guild to gain a huge edge in the aero-vessel market. Of course the Guild has a strong interest in keeping the ALEs origins a secret and so regularly scout out Ancient skyships and supply their own engineers to maintain ALEs on various skyships. This means whilst anyone can build a skyship, they must accept the fact that they have to lease an ALE from the Guild and have Guild staff on-board.

The Aero-Lift Engines work by vaporising grounded, high-grade glimmer-rock crystals and then driving an electrical current through the resultant gas (dubbed 'Glimgas') to produce a superior lifting capability. Though the process isn't fully understood even by the Guild itself, yet it has actively sought to sabotage efforts by other parties to create their own ALE.

Airships (or gasbags) use a mixture of conventional lifting gas and low-grade glimmer rock that's been ground to dust, though used high-grade Glimgas that's been collected by the Guild and sold as mid-grade is sometimes used. Because Glimgas (regardless of how it's produced) requires an electrical current, it is carried in separate gas cells to helium or hydrogen to reduce fire risk. Due to the poorer quality of this type of Glimgas and the prices charged by the Guild, it's generally used to give a boost to more conventional lifting gases. Those who can afford it, airships that solely use low-grade Glimgas have greater lifting capability compared to conventional gases but this still falls far short of what a skyship is capable of.

Having the monopoly on ALEs, simply due to being the sole supplier, the Guild has a presence in every nation save for the Iron Collective. Guild facilities are well guarded and shipments of ALEs to various aero-shipyards are done under heavy guard, typically the Guild's own aero-marines known as the Skyguard. The Skyguard also accompany Guild personnel on expeditions to crashed Ancient skyships that have been discovered or protect ALEs and have orders to destroy them to protect the Guild's secrets.

Posted by Stephen 'Stormwell' Hughes at 06:30 No comments: