Though the main focus of Frozen Skies is obviously aviation, there are other aspects of Alyeska that may appeal to players and some have been mentioned previously. Though aviators and their aircraft are considered vital, there are those who consider themselves equally important if not more so at keeping the lifeblood of trade in Alyeska going. Theirs is a less glamorous life trekking across the frozen wastes, fending off beasts and raiders alike to help keep the flow of commerce open. These are men, and women, known as Free Traders.

For a long time Alyeska was dominated by the Great Northern Trading Company, originally a fur trading business that gained a monopoly on all trade in Alyeska. Though the Great Northern ran into difficulties and had its assets seized by the Commonwealth, thus ending its long time monopoly and allowing independent traders to fill the void as the company ceased to exist. The Commonwealth formed a replacement called the New Gwentia Trading Co. (NGT for short), though it had limited power and influence compared to the old Great Northern.

The NGT's main function is to maintain some of the Great Northern's old trading posts, effectively small settlements in their own rights, and run general stores in various settlements across the Alyeskan Interior. The trading posts are located along established routes and offer safe-havens, offering lodgings, warm meals and supplies to wary travellers. Some of these trading posts are also service stations for motor vehicles, though this tends to be closer to the bigger settlements.

Another role of the NGT is contracting free traders, offering routes up for bidding and providing guards for hire. Contracts usually require yearly fees, but in return contracted traders can bypass Board of Trade fees and can claim compensation if they suffer losses. However there has been growing competition from startup truck companies who prefer to broker their own contracts with prospective clients.

Free Traders still hold sway over much of the Interior, their routes run from the few existing railheads to far-flung settlements. Admittedly slower than aircraft, a Free Trader convoy is able to transport items in bulk and is likely to remain a common sight for some years to come.

A NGT/Free Trader based campaign is likely to take place on firm earth and feature long treks through the Alyeskan wilderness. Typically it'll be based around a two or three vehicle convoy, most likely Mule Tracked Carriers, defending said convoy against beasts and outlaws. Players could serve as guards or simply be passengers in addition to the possibility of running the convoy themselves.

Aviation could still feature, either aircraft coming to the aid of a convoy or being scouts for a free trader seeking a new route.
Posted by Stephen 'Stormwell' Hughes at 15:04 No comments:

The Ancient Terrans are a key part of Frozen Skies' background, primarily for the setting's history and as a source of adventure hooks. There is also the chance for players to actually meet some Ancient Terrans, known as 'Lurkers', though admittedly probably not in a friendly manner. Since the last post about them, I've had a few more thoughts regarding them.

One of the biggest things that the Ancient Terrans had going for them was their technology, some of it has been retrieved by modern Darmonicans like the Skyships have others are still far in advance of anything currently seen. Its plausible that the Lurkers would still use some of this old technology, least the devices that they can keep working since making new ones would be a tad...difficult.

One thought along this line is having the Lurkers' Life Drain ability actually be some sort of device, a sort of personal life replenisher that works by stealing another person's life essence. This can extend to other devices such as one that cloaks a Lurker in shadows and thus allow them to sneak up on somebody unaware, perhaps even some sort of holographic device to help unnerve and dis-ordinate potential...erm...'food'.

Lots of possible ideas to run with, plus it ties into the Weird Science Arcane Background that is already in the setting. Still running with the idea of 'futuristic' weapons such as raygun style laser weapons.
Posted by Stephen 'Stormwell' Hughes at 09:00 No comments:

Mentioned that cargo planes are quite common in the skies of Alyeska, plus its envisioned that alot of Frozen Skies groups will be based around a cargo plane of some description. Originally I was looking at using the stats for a C-47 Dakota from Weird Wars, though with the aircraft creation rules its probably a better idea doing one or two from scratch.

A larger counterpart of the Beagle is the four-engined Wolfhound, which has tricycle landing gear that also helps to set it apart from the taildragging Beagle.

Been a couple of months since the last update and people have been asking how things are going.

So heres a round-up of things, thats also a day early!

Happy with the Setting Rules as they currently stand, hopefully playtesting won't throw up any problems. Don't see any more changes being made at this stage, but we'll see.

The rest of the work involved is sorting out Edges and Hindrances, as well as editing all the text to make it into a proper book format rather than a jumbled collection of notes and blog posts. I've made some progress here but there is still a fair amount of work to be done with the writing, but hopeful we'll see the final book some point in the New Year. A change of dayjobs and other factors means in theory that I have more time to devout to getting Frozen Skies finished.

Though I am pleased to announce that the artwork side of things have started moving again, the artist recently finished this piece of a Skyship. 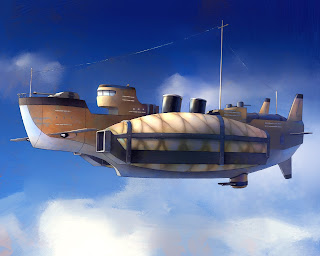 Posted by Stephen 'Stormwell' Hughes at 17:55 No comments:

Conventional aircraft have been covered along with airships of various descriptions, yet there is a type that has only been mentioned but never given much detail. In Darmonica these aircraft are known collectively as 'gyros' but they are effectively helicopters. They aren't that common in Alyeska and the few examples that do exist are in military service, primarily for the use of the Wulfbane Commandos.

Here are some examples of Gyros that can be encountered in Darmonica.

The Gyro-Courier is a fast and nimble aircraft, usually in its element in mountainous or urban environments. Primarily a civilian aircraft used to move small cargoes or passengers, but armed versions do exist and are used by corporate security forces.

An older type, originally used by the military during the early days of the Great Darmonican War for recce sorties but gradually replaced by faster aircraft. Does have a much longer range than the Courier model, a selling point for many a mining and logging company.

Exclusively used by the military, these aircraft are capable of carrying an entire squad of soldiers and are typically seen transporting squads of Wulfbane Commandos.