As summer gives away to autumn and the final few months of the year, perhaps a good time to announce a project I've begun which I hope to have finished before the year's end. It's a supplement for Cold War Skirmishes that I hope to release via the Savage Worlds Adventurer's Guild on DriveThruRPG and may form the general format for CWS related products going forward.

Oh and SWAGtember III: Return of the SWAG Bundle is how out. Check it out to find a ton of great community created content and my Operation Thule adventure. 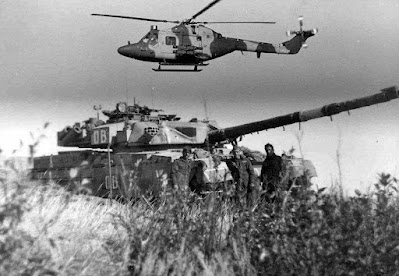 Lionheart is a supplement for my Cold War Skirmishes line that covers the British Forces during the Cold War period. The name references both Richard the Lionheart from English history and also the big NATO exercise Lionheart that took place in 1984.

As stated, the supplement's focus is on the British military during the Cold War era which I'm defining to be from the end of the Second World War in 1945 through to the start of the First Gulf War in 1991. This gives a time frame of some 46 years during which the British Forces saw constant action whilst undergoing changes in organisation, equipment and tactics. What this means content wise is an overview of structure and gear in the form of both weapons and vehicles with the focus on the British Army, though there will be a mention or two regarding the RAF and the Royal Navy.

Vehicles are going to be the bulk of the content and there is a surprising amount even going with what was actually used, so I'm going to focus on what was used on the frontline and thus more likely to be used by player characters. Aircraft wise, I'm probably going to restrict it to helicopters and light aircraft just to keep myself sane.

I'm including a draft below, which is far from finish due to stuff needing to be added along with the formatting needing to be sorted and pictures/artwork needing to be sourced. Though I am curious what level of detail people would like me to go into? Aka what years stuff was in service, etc?