So here we are, now getting into February as the year marches onwards to spring. This also means a new post from Utherwald Press as part of the monthly schedule it's now operating on. This month I have a couple of things to talk about, so stay tuned. 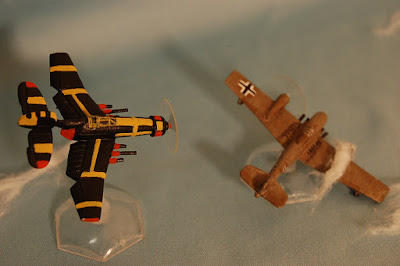 I'm still hopeful that Frozen Skies will get updated and released for SWADE later this year, though progress on that front have admittedly been slow due to reasons highlighted in my last post.

That said, recently managed to get some playtesting in.

Granted it was almost last minute as there was a tiny turnout for my regular gaming group, but useful all the same. It was a chance to try out aerial combat with a hex grid, something that seemed to help alot with the position of planes and the players seemed to like it. It worked, though there is still room for improvement.

*For ranges I went with dividing them by 50 to determine the number of hexes, though this seems too short and so I'm considering changing this. At present I'm trying to decide whether the ranges should be divided by 25 or 30, leaning towards the latter as it would fit in better with ranges in Savage Worlds.

*Manoeuvrers is something that needs to be expanded upon and tidied up a little, also ties in with movement. What I have is functional, but could be better.

Positioning and facing are going to be pretty important with this version, so this is going to be an area that will need some focus. Still a step in the right direction and it seems to work, which is good enough for me.

This was a local convention that I attended for the first time, though only as a trader and I 'commuted' from home for each of the four days I attended.

It was a very friendly convention with a strong focus on games, probably amongst the smallest and slowest 'trade hall' I've experienced at a convention. Other than food and fuel for the car, it was straight up profit and so I can't complain. Do plan to attend next year, bit better organised and perhaps get some gaming in including running some Frozen Skies.

Some positives is that I've now invested in a card reader to help boost sales and I may be able to get Frozen Skies picked up by Leisure Games here in the UK.

Really just a general checklist for whats planned/wish to achieve this year.

*Attend Diceni in Norwich in May.