This month we're back in the world of Frozen Skies with a look at an idea for some background lore for the setting. The genesis of this stems from a recent discussion about the portrayal of the afterlife in fantasy settings and various different cultures. Focusing on the Commonwealth here whose beliefs are rooted in Celtic mythology but altered and adapted to fit the setting. 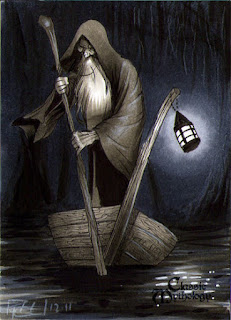 Kinda playing on a number of different sources here for inspiration, though the main basis is the Celtic Otherworld believed to both be the realm of the gods and also of the dead. This concept of the afterlife known as the Otherworld I plan to carry over into Frozen Skies, though this Otherworld is also believed to be the home of various spirits like the fey thus making it, in some respects, similar to the Feywild in D&D.

Passage to (and sometimes from) the Otherworld is conveyance via a ferryman, so alot like Charon in Greek mythology. Though in this instance the ferryman is based more of the Irish god of the dead Donn, just with a boat instead of a horse. With the Commonwealth's homeland being a bunch of islands I figured the ocean would have an influence on the cultural beliefs within the Commonwealth, hence the ferryman of the dead angle here. On a slight tandem here, funeral ships (for either burial on land or cremation at sea) could be popular amongst important families with ties to the ocean.

I like the idea of the Banshee from Irish folklore as a female spirit who heralds somebody's death, usually by wailing. Though I wish to expand on this, but keep the core idea of the Banshee being a herald of death. For the Frozen Skies version of the Banshee I'm thinking that when somebody dies, she either sings or wails depending on how good or bad the recently mortally challenged person was. This would then act as a herald for the person's spirit when it arrived in the Otherworld.

Another thing that I wish to incorporate is the Wild Hunt, least the concept of otherworldly hunters chasing after souls of the dead. My version would be led by a figure dubbed the 'Horned King' and the hunt itself targets the souls of those who have been bad in their lifetime. Course the idea here is that the soul is repeatedly hunted down depending on how bad they were, thus creating cycles where the soul is hunted down until they are considered to be 'cleansed' of their sins in life.

And that's what I have, though some parts may change as it gets refined and polished up.