Another of Darmonica's great powers was a nation birthed in the forge of war over a century ago and unsurprisingly has a very militant culture. Named after Ares, the Darmonican deity of warfare, the Artian Confederation ranks high in military might and could quite easily give the Commonwealth a run for its money. For now its attention is divided between its eastern border with the Iron Collective and maintaining control over Tylander territory that it has occupied since the end of the Great Darmonican War, though it does have ambitions further afield.

Those ambitions include Alyeska.

The lands that form the Confederation are no strangers to war, having been the battlefields between the Tylanders and the Sodkans for centuries. Prior to the Tyland-Artian War in 1741 AF the Confederation was little more than a loose collection of city-states and scattered farms, used by then to the armies marching to clash with one another. But conquest of the future Artian states rarely occurred to either side as the foresaid states acted as a nice buffer between Tylander and Sodkan territory.

By the early 1700s the Kingdom of Tyland made it clear that it had territorial ambitions proven by its conquest of the United Provinces, which included a Commonwealth defeat when it tried coming to the United Provinces' aid. The Artian states were growing increasingly warily, especially when an arranged marriage occurred that linked together the Tylander and Sodkan royal families. Fearing that plans were in motion that would lead to a Darmonican superstate some of the Artian came together and formed the League of Artia, a defensive union that was soon put to the test in 1714 when the Royal Tyland Army attacked and smashed its through through the western states.

The Tylanders made huge advances but were ultimately stalled upon the banks of the River Bhein by a hastily assembled Artian mercenary army and the fighting entered a lull during the winter of 1741-2. Unfortunately for the Artians a fair number of the mercenaries either quit or accepted Tylander coin, by the spring of 1742 the invaders had established footholds on the east bank of the Bhein and held a number of key bridges. By summer a series of battles saw a number of the Artian state armies routed and the situation was looking increasingly dire.

Wilstein was the Chancellor of the State of Uthermark and a veteran of the various Sodkan wars where he had honed his tactics. He put a call out to the other states to rally their soldiers at his capital of Utherheim, though much to the surprise of the other states Wilstein's city was prepared for siege and had extensive earthworks in a ring round it. Many thought that Wilstein was mad and was inviting his own destruction, thus refused to commit their soldiers to defend the city. But a few either guessed that Wilstein had a secret plan or saw an opportunity to make one last valiant stand, regardless of how Wilstein's own army was supplemented by a handful of others who stood ready when the Tylanders arrived to lay siege.

Days, then weeks went by and Wilstein made no move which led many to question whether they ahd made the right choice in supporting him. Weeks eventually turned into months as the city endured a battering from near constant artillery fire and supplies started to run low. Many begged Wilstein to throw open the city's gates to the conquerors, but the Uthermark chancellor refused. Then word arrived that the Commonwealth had landed troops to liberate the United Provinces, catching the Tylanders by complete surprise. Upon hearing the news Wilstein gave orders for a beacon in the city to be lit, which was a signal for an army that Wilstein had kept hidden in the nearby Utherwald Forest to attack. Wilstein's secret army smashed into the flanks of the enemy army and the city's defenders stormed out the gates to support them, by day's end the besiegers had been routed and the siege lifted.

It took another year but the Tylanders were finally driven out of both the Artian States and the United Provinces by Wilstein's forces and the Commonwealth respectively. Wilstein himself would go to become the Archchancellor of the newly formed Artian Confederation in 1746 and help foster good relations with the Commonwealth that paid off during the Great Darmonican War half a century later. Though Tyland's defeat ultimately led to that very same War.

In the decade since the end of the GDW relations between the Artians and the Commonwealth have turned sour, the main reason being the continued Artian occupation of Tylander territory. Admittedly towards the end of the War there was a growing rivalry between the two powers and there is little wonder that a cold war style situation as sprung up between them. But like everyone else the Artians are still licking their wounds from the War.

The present Archchancellor of the Confederation has three main priorties;

*Defend eastern border against a possible attack from the Iron Collective.

*Deal with insurgents in Occupied Tyland.

*Find an edge over the other great powers.

This last priority has seen the Archancellor dispatch agents to Alyeska in search of Ancient Terran artefacts, thus ending up in conflict with the agents of other nations. Some say he has become obsessed with rumours of some Ancient Terran weapon, even to the point of ordering his agents to ignore 'petty gizmos'.

Is he aware of something that nobody else is?

Utherwald Press will be at this year's Diceni show in Norwich (UK) this Sunday!

Love to see folk come and say hi at what is such a great event.

A little treat in the form of a Work-In-Progress snapshot of artwork currently being done for Frozen Skies. 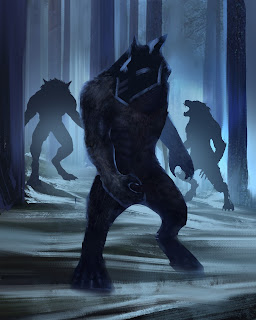 Posted by Stephen 'Stormwell' Hughes at 20:30