As Frozen Skies nears completion, I'm gonna take a closer look at small details of the setting to flesh things out a little for those who have picked up the Setting Primer. This is mainly intended to tie people over until the main book is released, also to see how the proposed coinage system works. 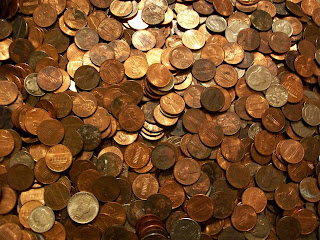 The currency used in Alyeska is based heavily on the Commonwealth system of coinage, though it has its roots in the currency introduced by the Great Northern Company in the early days of Alyeska's colonial days. It works by having three different types of coins; copper, silver, and gold. A hundred copper coins equals one silver coin, whilst ten silver coins equal one gold coin.

The coins currently in circulation are as follows:

Farthings are represented with a lower case 'f' regardless of the name of the actual coin, so a half-crown would be 25f. Similarly sovereigns are represented by the '£' symbol, meaning that two thrones and a shilling should read as; £20.05 (the farthing symbol is only used for prices less than a sovereign).

The Commonwealth also uses paper banknotes, widely issued in the Home Isles but their introduction in Alyeska has been resisted by the various gold mining companies. The companies prefer keeping the throne gold coin in circulation mainly to secure their profit margins and generally refuse to accept banknotes. Recently the Commonwealth has put pressure on the Alyeskan parliament to pass laws that recognise banknotes as legal tender, though this faces opposition from the gold mining companies.

Non-Commonwealth currency may be accepted but depends on the individual trader, however a favourable exchange rate can't be expected.
Posted by Stephen 'Stormwell' Hughes at 22:51