A second Rogue's Gallery in a row?

What madness is this?

Its part of some ideas I've to further flesh out and develop the world of Darmonica to make it seem more like a living, breathing world. The recent Airman's Gazetteer series was part of this and so will be a few Rogue's Gallery posts. This week's post expands a bit on Genci culture and provides potential allies or enemies for the characters to encounter. 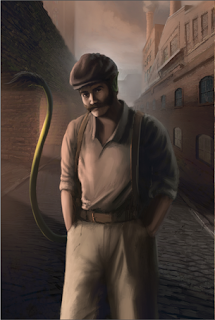 The Genchi are treated as second-class citizens throughout Darmonica. They are forced to live in slums and ghettos with the vast majority living below the poverty line. They are often accused of thievery and the law virtually never ever comes down on their side. Human gangs will frequently target Genchi ghettos or slums with a sizeable Genchi population, knowing that for the most part they can get away with doing so.

In response the Genchi have formed gangs of vigilantes to protect their homes, something that has sparked increasingly violent responses from Human gangs as well as the police. These Genchi vigilantes are often called 'Clubmen' due to the fact that most of them are armed with clubs, the main weapon that is readily and easily available to them. Other blunt weapons and even knives aren't uncommon, though its rare to see a fireman and even then its typically a pistol.

Most Genchi clubmen are young males, normally led by a handful of older and wiser males. Females aren't unheard of, but they tend to be the most vicious fighters. They style themselves as a street gang and will even name themselves. The Gaff Street Cutters of Lindun are a particularly infamous gang having been featured in Commonwealth newsheets and even debated about in parliament due to their street battles with the police.