Since it featured in the most recent session of the Frozen Skies campaign has has already been mentioned a few times on the blog, figured its time to detail the Skywrights Guild. It is a powerful organisation, able to build and maintain a fleet of airships, and wields a fair amount of influence. Whilst it dominates the airship market, it isn't without rivals. 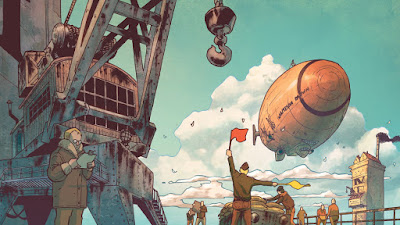 The Skywrights Guild is recognized as the largest builder of air- and skyships in Darmonica, having control of aero-shipyards in various countries either directly or through front companies. Outside of national militarizes and trade consortiums, the Guild is also Darmonica's biggest user of skyships and has a network of facilities and support infrastructure to maintain them.

The Guild has its origins not long after the first appearance of airships in Darmonica, a group of inventors and merchants banded together to promote the airship as the future of shipping and trade. Over time they worked up their business and brought out competitors, though they received a huge boost in the fortunes when the skyship first came about. They mainly focused on civilian models, though they took on a large number of military contracts during the Great Darmonican War as the various combatants sought to rapidly build up their aero-fleets.

In the present day the Guild's focus is on skyships, though it still has a hand in the airship market as it licences designs to small companies to build. The Guild does have a second monopoly on Lift Gas, a vitally important component of making airships soar through the skies. The Guild has made sure its virtually the sole supplier of Lift Gas, typically by buying out the mines and refineries needed for its production. The Guild's monopoly on Lift Gas has resulted in a black market for it, though usually of Lift Gas that has been siphoned from someplace and typically of questionable quality.

There are currently attempts by the powers of Darmonica to try and break the Guild's monopolies, none of them are happy with the idea of a transnational entity holding the strings on their precious aero-fleets. The Commonwealth's own Royal Aero-Works is a prime example; a state corporation that builds and maintains the Commonwealth's military airships and skyships has recently started producing civilian models. These civilian air-vessels are primarily being built for the state-owned airline Commonwealth Airways, though there are plans to start offering airships to smaller operators. The biggest problem, however, is going to be breaking the Guild's stranglehold on Lift Gas.
Posted by Stephen 'Stormwell' Hughes at 06:30