Certainly been a while since we've had a Gazetteer post, so probably high time that was addressed. As ever this serves to explore the untamed wilds and expand the map of Alyeska, thus providing more fodder for people's games of Frozen Skies. In this month's entry we take a look at one of many ventures that failed to live up to their investor's expectations. 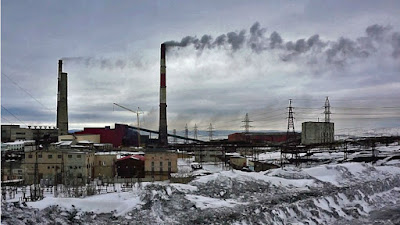 Scrapper's Island is located in the Needles, north of Theda Air Station.

The island has been used by fishermen for decades, originally being known as Dirgen's Landing since time almost immortal. Things changed with the end of the Great Darmonican War and the large amounts of war surplus flooding the market as the various militaries demobilised their forces. One enterprising businessman, a certain Sean Holden, sought to take advantage of this situation.

Spending no small amount of coin, Holden acquired the deed to the island and set about having a smelting plant and workers' housing constructed. Back in the Commonwealth's Home Isles he tendered contracts for disposal of surplus military equipment with the view of having it then transported to his island factory. It was Holden's intent to break up the equipment for salvage, either as spare parts or melt down the metals to be re-used for other purposes.

With a workforce in place, a few shipments en-route and operations already underway Holden was convicted for fraud and his assets within the Home Isles were seized by the Commonwealth authorities whilst Holden himself was imprisoned. Without it's main driving force, Scrapper's Island never achieved it's full potential. With no paychecks looking to be forthcoming, many of the workers upped sticks and left leaving those too stubborn or unable to leave.

Though looking mostly abandoned, Scrapper's Island continues in a state of limbo acquiring a tickle of junk that is broken down for spares by the so-called Scrappers that remain. The smelters stand silent, never really being used for their intended use as the island because more of a junkyard where various companies in Alyeska dispose of unwanted equipment.

Scrapper's Island could serve as the destination for a crew tasked with delivering a shipment of obsolete equipment, likewise the crew could visit the island in search of spare parts to make some repairs on the cheap. They could also be sent here to find something on behalf of a rich patron.