Right, time for the monthly update.

With UK Games Expo done and dusted for another year the focus can now be directed once more at Frozen Skies and the other projects that are in the works. So this week entails progress report on the status of Frozen Skies and some ideas for related projects.

The writing for Frozen Skies is now pretty much done, just waiting on a couple of pieces to be proofread and edited before everything is handed over to the layout guy for him to work his magic. There may be one or two extra bits of artwork required, though we'll see since I'm going with artwork for the start of each chapter and portraits of certain NPCs. Depending on how well Frozen Skies does I may look at doing an updated version with extra artwork, but that is largely depends on money flow (which is effecting how much artwork I can currently have).

Looking at Frozen Skies being about 130 pages, but it'll certainly be a 7" by 10" softback in addition to a PDF. Release is looking likely to be August time, initially through DriveThruRPG/RPGNow with a view of eventually getting Frozen Skies into game stores. May do a hardback version, but that depends on demand. Likewise looking at doing Frozen Skies for different systems, FATE is one people have been asking for.

My last update post I mentioned about other ideas such as producing cards with aircraft on them, thinking of it being a top-down view of the aircraft (like the picture below). This is something that I'll need to look into, though probably would be a cheaper alternative to miniatures as I can have a few generic planes which can have any stats used with them as well as already 'named' aircraft. Another idea I'm toying with is another adventure for Frozen Skies, it can basically be summed up as Murder on the Orient Express on a flying boat. 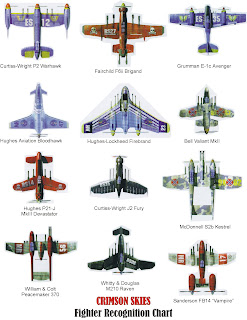 Posted by Stephen 'Stormwell' Hughes at 14:31