Its been a couple of days since we got back from this year's UK Games Expo.

It was good to be back after having to skip it last year and meeting people again, certainly to make sure Utherwald is there again next year. Already plans for next year are being made. 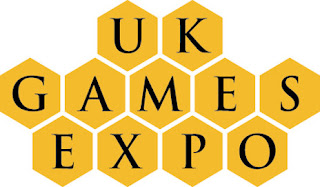 This year it was probably the best convention I've had, least with regards to selling stuff. No where near breaking even but a good way towards that goal. In addition I have a few avenues to explore when Frozen Skies is release, mainly to help promote it and get distribution to game stores sorted. Certainly feels like I've raised greater awareness of Frozen Skies and seemingly some follow through sales.

But I could've possibly done better.

I was sharing with a couple of groups (Exilian and Birmingham Game Designers) and as a result the stand appeared a little cluttered, which may had made it difficult for people to tell what the stand was about and possibly put people off. If I'm sharing with anyone next year I need to make sure Utherwald Press is its own distinct thing and easily identifiable. May go with the same size pitch I had with two tables, though the tables at either end of the pitch to effectively create the impression of it being two separate stands (if that makes sense). Likewise I need to invest in a banner of some description.

Frozen Skies should hopefully be released at the beginning of August, just in time for it to be announced at Gen Con. After that it'll be a case of getting it into game stores before starting on the next project, though does hopefully mean I can submit it for next year's UKGE Awards.

Posted by Stephen 'Stormwell' Hughes at 16:22