One of the things I wanted to do with Frozen Skies is maintain Alyeska's frontier feel; it is sparsely populated with a scattering of settlements rather than grand cities. Man has tried to tame this land but the land has pushed back in various different ways, leaving abandoned remnants of broken hopes and dreams. These are various ghost towns that can be found across Alyeska, any of which can be worked into an adventure.

On a side note, just (at time of writing) £400 left to go on the Frozen Skies Kickstarter. 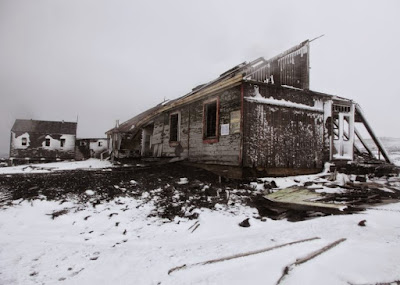 There are various abandoned outposts and so-called ghost towns scattered across Alyeska, most were established with high hopes and expectations that didn't pan out. Others were abandoned either due to disaster or for other more mysterious reasons.

Off the Alyeskan coastline there are many islands, some have been inhabited at various different times. There are some like the infamous Roth Island which are considered to be cursed places where no sane man ought to go. Other islands contain rusting old whaling stations, relics of a industry decimated by the Great Darmonican War and one that has never recovered. In the far north are various weather and research stations, only a handful now remain due to the war or a volcanic eruption that devastated Black Island in 1829 AF.

The town of Mcguire Pass sits in the mountain pass of the same name roughly north of Morrdun in the Dragonspine Mountains. It was where one attempt to build a railway line across the Dragonspine was made, and the township was established originally as a camp for the workers and then later as a rail depot to refuel or swap over locomotives for trains crossing over the mountains. Both the rail depot and the railway line had been completed when disaster struck of a major landslide that blocked one end of the pass. Considering it too expensive and difficult to clear, the company simply abandoned the line and the town. Only the line between Gravenburgh and Tay Rivers exists as the sole railway that cross the mountains, Mcguire pass has been forgotten about as its population has dwindled to nothing. A few derelict buildings, the abandoned depot and rusting tracks are all that remain to mark its existence.

Kirkton is one of a number of mining towns that have been established in Alyeska over the years, though aside from a lone watchman it has laid abandoned since before the Great Darmonican War. The town and its associated mines were owned by the Robson family, one of Alyeska's richest families until the late 1700s AF when their fortunes suddenly turned. One after another the mines ran dry or started being plagued by accidents, causing many of the miners to quit and seek work elsewhere. Then the entirety of the Robson family vanished, with nobody certain of their final fate. With the family gone, Kirkton became another ghost town as no other mining company was interested.

Today only the foresaid watchman remains, an old fellow who stays on behalf of his 'employers'.

There are countless ghost towns and abandoned homesteads across the Wulflands, will abandoned in haste when the Wulver overran the area. Many still have rich pickings for scavengers willing to brave both the Wulvers and any inhabitant who was too stubborn to leave. Some of them are used by the Alyeskan Outriders as a night-time safe-haven, preferably the ones with two-story buildings.
Posted by Stephen 'Stormwell' Hughes at 10:00