The Airman's Gazetteer: The Commonwealth

One of the Q&As I've done in relation to the Kickstarter had people asking about the rest of the world of Darmonica beyond the shores of Alyeska. I've covered the various nations of the world to a limited degree, but nothing in depth. The most obvious one to start with is the Commonwealth (which I've posted about before) since that is the nation that currently has the most influence over Alyeska. Gradually I'll cover the other nations in turn should this mini-series proves to be popular, but hopefully it'll prove useful for those who wish to take their games of Frozen Skies beyond Alyeska and explore the rest of the world of Darmonica. 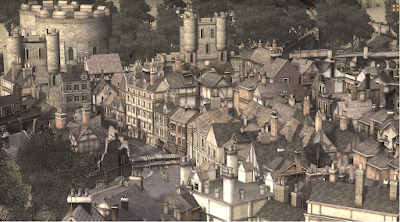 The Commonwealth of Gwentia is based in a cluster of islands known as the Home Isles, separated from the coastline of Tyland by a channel of water several miles wide called the 'Gwent Straits'. It has a monarch as its head of state, presently Queen Lothwyn Boudica Cathmore II. There is also a First Minister, Edmund Vermillion, who is the head of Government and answers to the Queen as well as Parliament. The Commonwealth's capital is the metropolis of Lindun, a vast industrial city that still bears scars from the Great Darmonican War.

Its laws aren't that much different from those in Alyeska, but the Home Isles are more heavily populated and thus have a much greater urban area. Rationing is still in force but has steadily eased off in the decade since the war ended, though all the cities and major towns still have bomb damage with reconstruction efforts being slow to gather pace. Like wartime air raid shelters are still in use and air-aircraft batteries can be found scattered across the length and breath of the Home Isles. With the war ending in an armistice, there is an uneasy peace and there is the ever present threat of sky pirate raids. The three Services of the Commonwealth Armed Forces (Army, Air Force and Navy) have a noticeable presence, especially since conscription in the form of a two year long term of 'National Service' for males when they turn 18 years of age.

Outside of the towns and cities there is still plenty of countryside, alot of it is made of small villages and farmland with some wilderness areas where wild forests still hold sway. Transport is mostly rail based, but motor vehicles have started making their presence felt as well as aircraft that can reach the few remote areas (particularly float-planes). The Commonwealth Air Force conducts regular air patrols and the Home Isles boost a decent sized and capable police, though the latter is split up into territorial forces for the various regions.

The Home Isles are linked to Alyeska via a twice weekly skyship service, though crossing the Great Ocean is difficult thanks to the storms collectively known as Taran's Tempest. Maritime vessels are commonly, especially since the Commonwealth holds former Tylander ports on the other side of the Straits. There are also a few air routes, but most of these are routed via Artian controlled territory with few direct flights to the Tyland Free State.

On the whole, people in the Home Isles enjoy a more comfortable standard of living than their Alyeskan cousins despite the war damage the Isles have suffered. Electricity, telephones and radios are both more reliable and in widespread use. Likewise, aircraft can take advantage of wartime CAF bases that have now been opened up to civilian use. You have to search very hard to find anything close to the frontier feel of Alyeska, even the smallest town boosts a well maintained airfield. Generally the Home Isles have a more civilized feel to them, but a comparable amount of crime thats geared more towards smuggling and the black market. Though there is a greater restriction on weapons with firearms requiring a license to own and use.
Posted by Stephen 'Stormwell' Hughes at 17:00