Darkwatch is the combination of two Setting Ideas; Forsaken and Deepwatch.

The core of Darkwatch is still the original idea for Forsaken, except I've decided to make subterranean elements a stronger part of the setting. Also envisioning Darkwatch to play as a reverse resistance campaign; the player characters are part of the occupation forces attempting to root out the resistance cells of the enemy forces still lurking in the city. 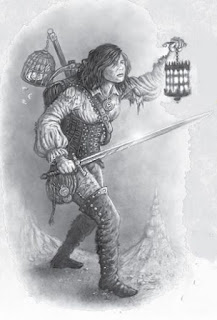 As I said above, I view Darkwatch based games and campaigns to be the reverse of the typical resistance campaign. Though the city has been liberated, it is far from secure as enemy forces still lurk in the shadows. The player characters are part of a group called the Darkwatch, effectively the city watch and military garrison. Their job is to basically protect the city as it starts to rebuild and to secure it by hunting down the enemy remnants still within the city.

Also going with the idea that the war against the dark forces is still ongoing, so the characters will have to deal with sabotage and trouble from soldiers going to and from the 'front'. It could be as mundane as guarding a grain warehouse or as exciting as chasing across rooftops after an enemy spy. In addition to the military angle, the characters will be expected to deal with crime to help promote law and order in the city. From time to time they could also have to deal with deserters hiding out in the city or be sent to deal with bandits in the countryside surrounding the city.

The ultimate goal of a Darkwatch campaign would to be fully reclaim and secure parts of the city, whole campaign arcs could be set in a single district. There is the possibility of the characters finding treasure amidst the ruined buildings and tunnels of the city.
Posted by Stephen 'Stormwell' Hughes at 06:30

Email ThisBlogThis!Share to TwitterShare to FacebookShare to Pinterest
Labels: Darkwatch