So mentioned last week that I was taking another look at the Wulftouched, mainly because I wanted to change how they work in the rules. Had some feedback on my initial ideas and some time to think over it, certainly looking like basing the Wulftouched's mechanics on the Harrowed from Deadlands is something worth perusing. So this week is an attempt at getting some rules down for the Wulftouched and a few Edges. 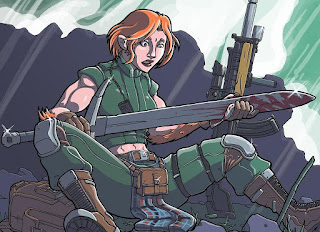 Remains a Major Hindrance, though it works similarly to the Harrowed Edge from Deadlands but without any of the benefits. It also unlocks a series of Edges.

Fury works similarly to the Harrowed's Dominion, though this is a right up Trait roll rather than an opposed one. A character begins with a Fury of 0, though this changes based on the success or failure of the character's Fury roll (see below). The GM will generally call for a Fury when they feel the situation is right, this is typically when the character is under a great deal of stress. Make a Spirit roll for Fury when the GM calls for it, using the character's current Fury score as a modifier. Fury can never go below -4 or above +4.

Success: The Wulftouched retains control and gains 1 of Fury, or 2 with a raise.

Failure: Your character loses a point of Fury and is Shaken, though doesn't 'wolf out'.

Critical Failure: The beast is let loose as the character loses 2 points of Fury and transform into a Wulver. The character remains in this state for 1d6 hours before changing back, though possibly with an uncomfortable taste in their mouths.

The character's bonus to Intimidation increases to +4.

The character gains Claws that do Str+d4 damage in combat and count as Natural Weapons.

Gains +2 to Survival rolls made for Tracking.