Stated last month that I was looking at the air combat system for Frozen Skies, part of the overall process of updating it for SWADE. This month is my thoughts I've had regarding this over the previous month. Also, stay tuned for news of the next event Utherwald is attending this year. 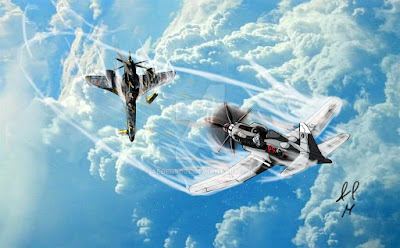 On the whole, what I've previously written for Aerial HEXfight largely still stands. Though there are some changes and additions since I originally wrote that post.


Maneuvers still need some thought, though Immelmann I'm thinking of increasing it to 3 or 4 hexes.

Also looking at different ammo and rocket types to spice things up a little.

Plus, heres a new Setting Rule;

One of the risks of flying the northern skies is that of ice forming on the wings of aircraft, which can be dangerous enough to cause an airplane to fall out of the sky. At the GM's choice or part of an Obstacle Travel Encounter, run a challenging Dramatic Task (four successes over three rounds).

Overall Success: You make it through without issues.

Overall Failure: You make it through at the cost of your aircraft suffering 1 Wound and 1 Critical Hit (treat Crew result as Chassis instead).

Failure during Complication: Piloting roll with all penalties or the aircraft crashes and Wrecks immediately.

Weather modifiers range from -1 for clear but extremely cold weather through to -4 for a full-blown blizzard. For combat it is suggested that you only use the weather modifiers.

Now able to confirm that Utherwald will be attending Diceni 2020 in Norwich on Sunday 3rd May, see you all there.
Posted by Stephen 'Stormwell' Hughes at 06:00