Couple of days before the writing of this post (and around a couple of weeks before it goes live), I did a playtest via Roll20 of Frozen Skies' air combat rules against the backdrop of the launch of SpaceX. It was nice getting back to playing Savage Worlds properly (admittedly in a virtual setting) and a chance to see how well the air combat rules worked. Cannot say whether the virtual format aided or impeded things, though things seemed to go well enough.

If you wish to support me or like extra content, please consider checking out my Patreon page. 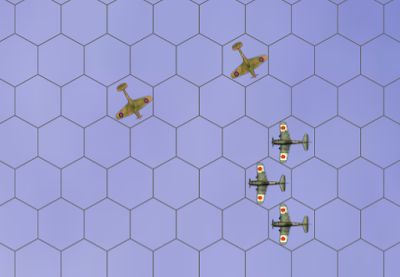 Since I only had couple of players from my regular group, went with a couple of player controlled Kestrel fighters going up against a Wild Card Ace in a Kestrel with couple of Wingmen Extras flying Trodai/Warrior fighters. Single character sheet was used for the skills/rolls and aircraft stats and the rules were there as Handouts for the players to read and reference.

Started things by walking through the rules for Savage Worlds (as one of the players hadn't played the system before) and then the air combat rules (though interrupted by the SpaceX launch). Once everything had been explained and the players seemed happy with everything, I setup the combat. Placed the aircraft of the two players on one side, then put the three enemy aircraft round 15 hex squares away facing the players.

Went through three rounds of combat, which was a pretty close thing and I'd expected the NPCs to claim victory but then my notoriously bad dice rolls kicked in. Ended up having at least a good dozen or so failed Out of Control rolls, though realised now that everyone had the Ace Edge and thus could've ignored couple of points of penalties. D'oh!

In the end the players emerged victorious, even though one of their planes took couple of Wounds in the process. The enemy Ace got shot down first after his aircraft took an absolute mauling, the two Wingmen sharing his fate soon afterwards.

The players agreed that the rules seemed pretty solid and I am even more convinced that a hex grid is the way forwards. However, there were some points that were brought up.

*The Wingmen's aircraft I ran as being just like normal Extras in Savage Worlds, basically they only had a single Wound. I'd done this to help speed up combat based on experiences in previous playtests, though the players suggested perhaps increasing the number of Wounds to give them a little bit of staying power. So I'm thinking of having a base of a single Wound but increasing this based on Size of the aircraft, thus two Wounds for a Large aircraft and three for a Huge one.

*Weapon arcs was something that was brought up by one of the players (the planes only had forward firing weapons). Though once I'd pointed out that it was possible to have backward firing guns and even turrets, explaining how those worked, he seemed satisfied.

*Manoeuvrers was bit of an interesting one, chiefly when they can be done. Suppose this can be addressed by stating when each one can be done.

Though a second d'oh! is that I've just realised/learnt that Out of Control rolls are only on a Critical Failure or in certain situations.
Posted by Stephen 'Stormwell' Hughes at 06:00