And so here we are, an adventure involving the pirate gang known as the Banshees. It is a standalone adventure that can easily be fitted into an ongoing campaign or serve equally well as a one-shot, though the main focus is air combat which is something to be taken into consideration. Depending how well this does, I'll certainly consider doing more content along similar lines either in the form of a series of linked adventures or more updated character stats and companion adventure. 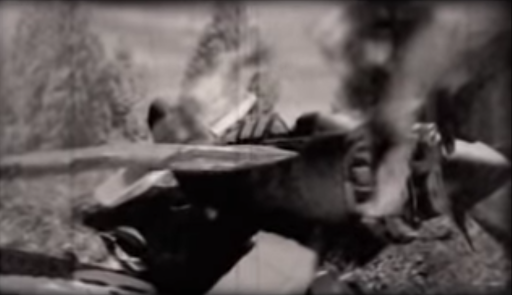 The setup for this adventure is pretty simple; It starts with the assumption that the characters are travelling in a sizeable aircraft of some description (cargo plane or airship) over the wilderness of Alyeska.

Call for a Notice roll for the characters and those that pass will see a column of smoke on the horizon, though those with a d6 or more in Piloting could possibly recognise it as coming from a recently crashed plane. Presuming the character go check it out they will find a fighter craft billowing smoke and the pilot still sat in the cockpit but unconscious. Anyone checking the aircraft for insignia will find the picture of a screaming female wraith or ghost, a Common Knowledge roll (those with connections to or knowledge of sky pirates will get a +2 on this) will reveal that the aircraft and pilot most likely belong to the Banshees pirate outfit.

Pilot herself could simply be a normal pilot of the outfit or even Natasha herself depending on the GM's choice.

The characters have a few options on how to proceed here;

*Morally dubious characters would simply leave the pilot and salvage what they can of the plane. This will, without a doubt, make them enemies of the Banshees should they find out.

*Righteous characters will realise that the pilot is a wanted criminal and therefore take her to the nearest settlement of a decent size and hand her over to the law. Going with this option will incur the wrath of the rest of the Banshees who arrive to rescue their downed pilot, the characters could hand her over at this point or try and make a run for it leading to a Chase or running air battle. Obviously handing the pilot over could make the Banshees more friendly in the future, making it a run for it will make them enemies of the characters.

*Charitable characters, even realising that the pilot is a wanted criminal, could try to return her to her outfit or take her to the nearest hospital. This option will involve a Chase, but this time the opponents are regular sky pirates flying Kestrel fighters (see the Frozen Skies Black Ice Update for SWADE). Going with this option could allow the Banshee pilot to help out the characters as an extra gunner, a pilot or simply do Support rolls. Of course, picking this option will certainly make the Banshees more inclined to be friendly...perhaps even come to the character's aid if they're really struggling.

And there you have it, a nice and simple adventure that's straightforward enough to run and will hopefully provide plenty of fun. Though feedback and suggestions are most welcomed.