This week's blog post is an adventure for Frozen Skies with bit of a horror theme, the basic aim is for a Halloween one shot though could still be inserted into a campaign. If this is received well I'll try to do more themed adventures, possibly for Frozen Skies or for other adventures. 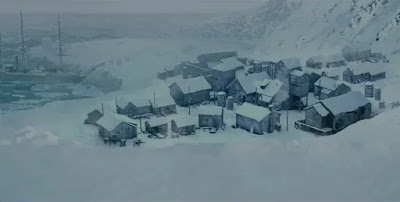 Weyland Station is a small, remote coastal settlement located in the far frigid north of Alyeska beyond the Monolith. The settlement was founded as a whaling station, though that was a venture that didn't pan out and these days the settlement is home to a handful of ice fishermen and their families. There is a small airstrip to allow the settlement to maintain contact without the outside world via aircraft, but also allows the Royal Aero-Fleet to maintain a small weather station during the summer months.

The settlement's remote location and relative isolation made it a target of the Wulfen Brethren for one of their nefarious experiments. The Brethren view the Wulvers as nature's ultimate form and the true masters of the world, so they've done what they can to allow the Wulvers to dominate Alyeska. Part of this involves the use of experimental chemical mixtures designed to try and turn humans into the savage beasts. Weyland Station was their latest test site.

As for the characters' involvement, there are a few options.

*A Cry For Help; The characters could receive a call for help which could be from the weather station, townsfolk or even somebody they know.

*Courier; Could be that the characters make a delivery to Weyland Station, supplies for the settlement or the RAF weather station. On the flip side, they could be heading to the settlement to pick something up.

*Random Chance; Another option is that the characters stumble upon Weyland Station, either because they got lost, diverting because of bad weather or they've been in a dogfight and it's the closest place to put down for repairs.

Whatever the reason for the characters to wind up in Weyland Station, emphasis how remote it is and give scant details for a Common Knowledge roll.

The characters should radio the settlement on approach, though they'll receive no response to their calls. Likewise, if they're answering to a distress call they'll find that the message is on repeat. First glimpse of the settlement reveals a cluster of snow-bound buildings close to what appears to be an airstrip with a couple of small aircraft, other than a few electric lights shining through windows there are no signs of life.

Once the characters land, nobody seems to come out to greet them and on closer inspection they find that the two aircraft appear to have been deliberately damaged (Repair roll at -2 to determine this). At this time a heavy fog rolls in, drastically reducing visibility (-4 penalty for Dark) and making it extremely unsafe to fly. The characters are effectively grounded for a few hours in what seems to be a ghost town, though there are signs to suggest that it was recently inhabited.

Moving through the town and checking out the various buildings they'll find signs that something happened like smashed windows, gigantic claw marks and large holes ripped in walls. Call for Notice rolls and tell those who get a raise that they see something moving in the fog, just a large shape and no details. After this describe the characters hearing strange, beast-like cries out in the freezing fog and that something heavy lands on and moves about the roof of whatever building they happen to be in. Emphasis the walls creaking under the weight and perhaps the building sagging slightly as it struggles to cope.

Then launch the attack.

The creatures, in this instance mutated human-wulver hybrids, will charge out of the fog making a beeline for the characters. Due to the sudden attack from the fog and the hideous appearance of the creatures, have the characters roll a Fear check at -4. There are two of the creatures per each character and they will attack relentlessly until one side or the other is wiped out.

If the characters survive, they'll be able to fly out once the fog lifts but play up the tension and tease a possible second attack. If you wish to expand this into a much longer game, perhaps have the characters find vials or other pieces of equipment related to chemistry which could be turned over to the authorities. A maker's mark on the equipment will be the start of a trail that leads to the Wulfen Brethren and their insidious plots.

The creatures are human-wulver hybrids, a hideous combination of the two. The features on the creatures will vary alot, some may have more human facial features or something more wolf-like. Sames goes for the rest of their bodies, leaving most misshapen looking.

Posted by Stephen 'Stormwell' Hughes at 17:26