We're coming to the end of an unprecedented year and entering what is a traditionally a time to share with loved ones and of gift giving in addition to spreading cheer and hope. This is going to be my last blog post of the year and the next one isn't likely to appear until mid-January, so in the spirit of gift giving I'm giving you lot an adventure for Frozen Skies. This is in part inspired by the 1925 Nome Serum Run, least to the point of a remote snowbound settlement requiring urgent supplies. Still, I hope the adventure provides a fun and interesting game for those that play it. 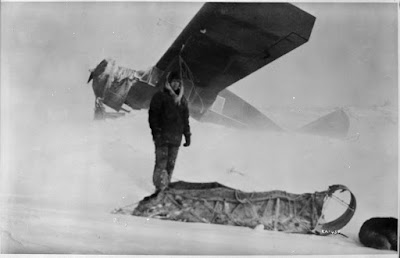 It's winter and the so-called Shrouded Days are creeping ever southward, engulfing the northern most regions in a month or so long night. Some folk have already come south, though others remain to endure the darkness having stockpiled key supplies. Though disaster has struck the remote settlement of Windscale's Gap; a fire broke out and razed it's storehouse to the ground leaving the settlement critically short of supplies. A mercy flight was already dispatched, though a distress call was received from the aircraft before all contact was loss.

A second flight has been hastily arranged.

This is where the characters come in, contracted at short notice to attempt a second flight to Windscale's Gap to deliver urgently needed supplies before bad weather shuts down the air route. They can ask about the first flight and that contact with the aircraft was loss, along with it's rough co-ordinates, but what happened to the aircraft is unknown. If the characters decide to try and salvage some of the supplies from the first flight to help out the settlement, award them a bennie each.

For this adventure, unless they already have one, the characters are presumed to have a Beagle cargo plane with the following additions;

If the characters decide to salvage supplies from the first flight, they can find the wreck with a raise on a Notice roll. Support rolls can be used if the players feel uncertain about their task, though feel free to give bonuses based on the amount of time they devote to the task though remind them they are against the clock.

Once they have found the wreck, landing isn't an issue though there doesn't seem to be any signs of life. After they've landed and proceeded on foot to the wreck, roll a d6 and consult the table below;

1 - A pack of wulvers, one per character, attacks the party! (see Frozen Skies)

4-5 - Pack of snow cats, one per every two characters, stalk the party. (see Frozen Skies)

6 - Survivors! Some of the plane's crew are alive but are in need of medical attention ( roll d3 for number of survivors, presume a Wound each).

Trying to investigate the cause of what happened to the first flight can be done either by asking the survivors (if any) or getting a raise on a Repair roll whilst inspecting the wreck. The cause appears to be engine failure, something backed up by the remains of the engines and lack of any obvious 'battle' damage.

Some of the supplies are thankfully still intact and can be moved to the character's own aircraft.

Flying the skies of Alyeska isn't without it's risks and as such draw four cards from the Action Deck to determine if any Travel Encounters occur. Consult below for suggestions on how to do each Encounter type.

Spades - Enemies: This can be d6 sky pirates flying Trodai Fighters, presume d6 Piloting and Shooting along with the Rock and Roll! and Steady Hands Edges.

Hearts - Strangers: SWADE does a good job of covering this, though NPCs could offer help by pointing out the wreck of the first flight or providing a +1 bonus to Piloting (for the rest of the session) by tipping off the characters about conditions ahead.

Diamonds - Treasure: If the characters haven't decided to find the wreck of the first flight, they could stumble upon it by pure chance. If they decide to check it out, run it as per the Optional: First Flight entry detailed above.

Clubs - Obstacle: This could be a blizzard or storm that the characters inadvertently fly into. Run this has a Challenging Dramatic Task with the characters needing to get two tokens per character over three rounds. Piloting is the obvious skill to use here, along with Notice for whoever is supporting the pilot. For other characters they can use either Athletics, Repair and Strength to help keep the plane stable and flying by stopping cargo from being thrown about. Alternatively this could be done as a Quick Encounter with the suggested skills mentioned previously and a -2 penalty for the extreme conditions.

After a possibly harrowing flight depending on the players' luck, Windscale's Gap finally emerges as perhaps the most welcoming sight in the world. The settlement is little more than a collection of wooden buildings, though the burnt remains of the storehouse can be clearly seen amongst the banks of snow. Whilst they have reached their destination, the characters aren't quite out of the woods.

They've still got to land.

Windscale Gap's lacks an airstrip, instead having a clear field for aircraft to land which has couple of feet of snow. The weather is also closing in, meaning a -2 penalty on the three Piloting rolls needed to safely land. Support rolls in the form of Notice to spot dangerous patches of snow and Repair, if the aircraft had taken damage, can be made to help with the landing. Failure on each of the three Piloting rolls inflicts a Wound on the aircraft, though the pilot can forego the third roll to take-off and circle round for another try which will grant a +1 bonus to Piloting on the next landing attempt.