Recently had the chance to do a one shot where we ended up running an air combat for Frozen Skies, again it seemed like the air combat rules had a solid foundation and the hex grid certainly seems like the way forward. That said, it was also an opportunity to get some more feedback from my players and brainstorm ideas for possible revisions and improvements. As it turned out there were some good ideas to make movement more clearer and keeping it true to the Fast Furious Fun motto of Savage Worlds. 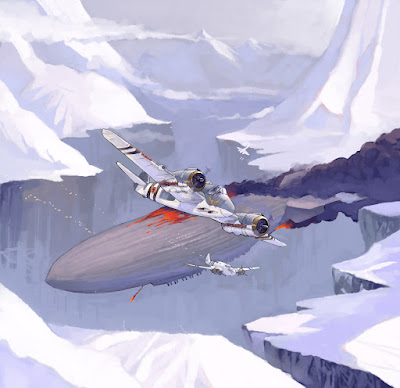 Think I'll the post air combat rules for Frozen Skies as they now stand with the recent revisions, especially for new people who have only just stumbled upon this blog and/or the Frozen Skies setting itself.

The air combat rules presented here are a more tactical alternative to the vehicle combat rules found in Savage Worlds and it's supplements. Biggest difference is that these rules require the use of a hex grid, thus giving them more of a tactical/wargame feel. There are a few changes to the rules for vehicle combat in Savage Worlds, but these are down to the use of a hex grid and can be adapted for use with other settings involving combat between fighter craft.

Due to the use of a hex grid, scales work a little differently with these rules.

To get the speed of an aircraft, divide it's Top Speed by 60 and round up to get it's so-called 'Hex Speed' which is the number of hex squares it can move.

For weapon ranges, divide these ranges by 30 and again round up where needed.

Optional Rule: As a way to help speed things up, you can use the so-called Wingmen rule.

This divides aircraft into one of two categories, Aces who are Wild Cards and Wingmen who count as Extras under the normal Savage Worlds rules. The difference is that the Wingmen aircraft count as having two less wounds, so a base of one wound plus an additional wound for each size category above Normal/Medium. This means Wingmen have less staying power compared to their Ace counterparts, thus making them a bit easier to take-out and keep things moving reasonably quick.

All aircraft are required to move at least half their Hex Speed, moving any less requires a Piloting roll to avoid the aircraft stalling and going Out of Control.

Turning requires the aircraft to have moved one hex square before turning, once this is done the aircraft can then change it's hex facing and finish the rest of it's movement. Only one turn is allowed per aircraft per round and may require a roll with modifiers as shown in the picture below, but is considered a Free Action. 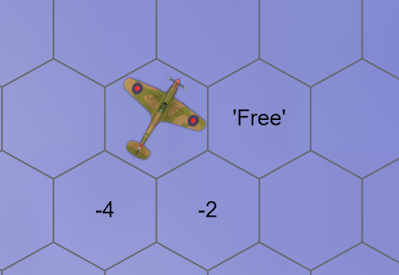 Boost: A pilot can move his aircraft an additional 1d3 hex squares if he wishes. Though the pilot then suffers a -2 penalty to all their other actions when boosting their aircraft speed. This penalty is reduced to -1 by the Steady Hands Edge (similar to the penalty for running).

The following maneuvers from the Savage Worlds Chase rules can be used for air combat in Frozen Skies with the necessary adaptions noted. For opposed Piloting rolls the aircraft with the higher Climb value (if used) gains +1, this increases to a +2 if the Climb value is doubled that of the other aircraft.

Frozen Skies still uses the regular Savage Worlds for vehicle combat with respect to Recoil, Unstable Platform and modifiers due to Weapon Ranges, etc. Shooting still requires a TN of 4 to hit and is, of course, still effected by modifiers.