I've posted about the world of Darmonica beyond the shores of Alyeska, ever-expanding the overall setting of Frozen Skies. One of the things I've posted about has been the Commonwealth Colony of Orduesh, an outpost located in the southern deserts. This week we're going back to this little outpost and exploring some options to expand your games of Frozen Skies. 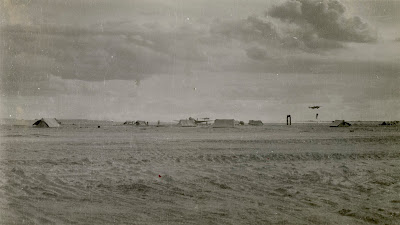 Flying what's known as the Southern Wastes offers it's own set of challenges both like and unlike what aviators in Alyeska's chilly climes encounter. Heat and thirst will take it's toll on the unprepared whilst sand wrecks havoc on machinery. For the former keep the Heat and Thirst Hazards in mind, whilst the latter I'm toying with the following rule.

Due to the sandy nature of the Southern Wastes, all Repair rolls on machinery are made with a -1 penalty (though a shuttered hanger or workshop negates this). Similarly, mechanical equipment requires a daily upkeep Repair roll (with the aforementioned penalty) but each raise grants a whole where this roll is not required. Failure requires another Repair roll and d6 hours to fix the piece of equipment, a Critical Failure requires a proper hanger or workshop and d6 days to rectify the problem.

If the piece of equipment was caught in a sandstorm, this inflicts another -2 on Repair rolls.

Similar to Alyeska, the Southern Wastes are dotted with Ancient ruins and mining outposts in addition to boasting large swaths of unexplored territory. The Wastes are also host to border skirmishes between the Commonwealth and the Sultanate of Taramate and efforts by other Darmonican powers to woo the latter, thus giving some options for diplomatic or even spy based plots.

The most obvious foe would be the Sultanate which is openly hostile to those found within it's borders without permission, obtaining a permit for safe travel is a venture in of itself.

But what about beasties lurking in the desert sands?

One creatures I'm currently brainstorming is one that I've taken to calling the Burrower, simply because it spends most of it's time under the sands. This creature would be a predator and thus the Southern Wastes' counterpart to the Wulvers of Alyeska, though what type of creature I have yet to decide upon. It is tempting to make it a giant sand worm, but I'm considering some sort of mammal.

Another idea I'm mulling is desert dwelling Windryders, almost as a tie-in to Alyeska.

So, thoughts and comments?