Not much to report compared to last time, things are now plodding along.

(Though there is new artwork!)

Work on Frozen Skies has been progressing on both the artwork and writing front, not as quickly as I'd like but its still a step in the right direction. Once I've cleared some stuff from my plate I should have a bit more spare time that I can dedicate to the writing. Though sales of the Setting Primer and the adventure have been ticking over each month, it nice getting a Sales Notification to help show there is growing interest.

Got responses from the podcasts that I've contacted, though nothing worked out as of yet and I need to poke them soon.

Finally new artwork; A Genchi, a race related to the Windryders but industrial/technology inclined. Believed to have once been slaves of the Ancient Terrans, but are basically second class citizens in modern Darmonica. 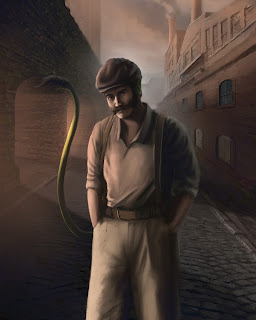 Posted by Stephen 'Stormwell' Hughes at 12:00