The Airman's Gazetteer: The Free State

Currently our series, which covers the various nations of Darmonica in a greater detail, we take a look at the Tyland Free State. Formerly the Kingdom of Tyland, it now little more than a sad rump of a nation still struggling with the aftermath of defeat. It also faces an uncertain future as parts of its territory remain occupied by powers that may possibly clash with one another before long. 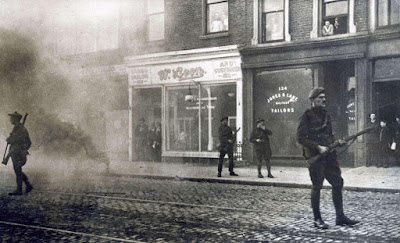 Compared to the Commonwealth, the Free State is a nation teeming with problems. There is deep seated anger at Tyland's defeat a decade earlier and at Tylander territory being in 'enemy' hands. The Provisional Government, based in Midraige, is considered weak and ineffective (mostly true) and has to rely on a small army to enforce martial law in order to achieve anything approaching stability. As per the Conditions of Surrender (otherwise known as 'the Conditions) that were imposed upon Tyland, a small council of ministers leads the Free State rather than a single head of state. These ministers are stuck between keeping the Artians happy and trying to fix the sighted injustice that the Tylander people feel has been done to them, it is a fine balance that the Provisional Government has struggled to make work.

The Free State has been even slower than the Commonwealth with repairing war damage, rubble choked streets and burnt out farmsteads are still a common sight. Though not all of the damage was caused by the war, some of it has occurred much more recently. There are frequent clashes between the Free State Army and anti-government forces, plus the fallout of clashes between Tylander resistance groups and Artian forces. This has resulted in martial law being imposed and the Free State becoming a grim and downtrodden country. There are shortages of everything and thus strict rationing, which in turns sparks more unrest and protests against the government.

Foreigners aren't entirely welcomed, though the Tylanders reserve their hatred for the Artians especially. As per the Conditions, the Artians are allowed to send their troops into the Free State at any time and arrest persons suspected of aiding the resistance groups. Artian troops are also exempt from prosecution under Free State laws, which gives them an almost free reign to do what they please. Even though the Commonwealth, for its troops based in the Treaty Ports, can apply for the same protections under the Conditions it elected not to do so. The Commonwealth has been pretty big on the conduct of its troops and building up a cordial relation with the Free State ahead of the Treaty Ports being handed over.