Bit of a break from the Airman's Gazetteer series, though that will return in a couple of weeks. The Kickstarter ended successfully, though we just scraped in over the target. So now work carries on behind the scenes getting more artwork done, sorting out extra content and doing a bit of spit and polish to get Frozen Skies ready for release. So quick round up of how things stand, some game news and an extra treat. 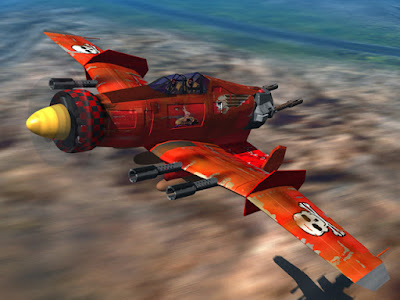 As stated above, the Kickstarter ended successfully even if we just scraped past the target goal. Huge thank you to Applied Vectors and the backers for making it happen.

The first Kickstarter draft PDF of Frozen Skies has been released via a Backers Only update, this is effectively a beta version for people to try out and give feedback. Though theres some stuff still missing (artwork especially), but that'll be sorted out over time. Next on the list is a revised and expanded version of Alyeskan Tales, a fiction companion for Frozen Skies, that'll first be released as a PDF for Kickstarter backers. The files on DriveThru will be updated, changes include a rewrite of The Alyeskan Job and a new story. Then there will be a few adventures to sort out as well.

Hopefully all this will be done by the end of the first quarter of the new year, though possible delays with artwork and getting files sorted. We'll keep folk posted how things pan out.

After all the Kickstarter rewards have been sorted and Frozen Skies given its general release there will be work on either the Skies of Crimson supplement for Frozen Skies or the beginnings of a new product line called Cold War Skirmishes.

Monday 20th November I'll hopefully be running a Frozen Skies one shot at the local university's games society (UEA Gamessoc). Sign-ups have been and gone for this and have generally been limited to society members, but it has been part of a series of RP one-shot evenings over the past couple of months. Next week's post will be a session write-up. CANCELLED.


I've allowed myself to be convinced into running a forum based game of Frozen Skies, though we're currently settling upon campaign theme. Possible I may do monthly updates on how this goes.

Been tweaking the Aircraft Creation rules, opening up options.

Created this little beaut based on the Fairchild Brigand from Crimson Skies.

The Blackforge Consortium has its hands in a great many pies, not all are exactly legal. Aircraft is one of its more legitimate ventures, even if its customers tend to lean towards being a tad fuzzy with how they regard the law. The Marauder is an aircraft marketed generally towards sky pirates, though some company militias have brought some.

It is a medium fighter, notable for having a bomber style turret at the rear of the aircraft. It looks like an gainly aircraft but it packs a punch and a few have been retrofitted to carry rockets for anti-airship attacks, though these fittings do have a negative impact on the aircraft's handling.

*Rocket mountings retro-fitted to aircraft, -1 to Handling when carrying rockets.
Posted by Stephen 'Stormwell' Hughes at 17:24