First update of the new year.

The biggest thing is progress with the Kickstarter fulfillment, something thats taken a shift forwards and is probably of interest to a few people. There is a couple of other things that tie into the Kickstarter which some details about will be posted. Lastly there will be some stuff concerning what Utherwald Press has planned for this year.

As mentioned above, the Kickstarter has seen a shift forwards with the signing of a few artists. Some preliminary sketches have been received in addition to one or two finished pieces. One of the pieces being worked on is located below and is of a female Genchi. If the artists maintain their current rate of work, then Frozen Skies may be out earlier than expected. 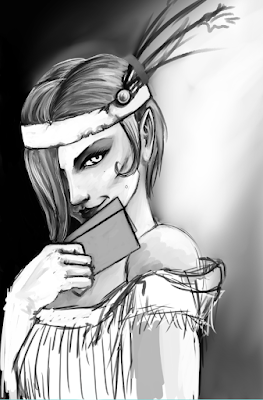 Act 1 of the Kickstarter exclusive adventure 'Remnants of the Past' is almost done, just need to finish off the Act in question and had NPC stats, etc. The first draft of this should hopefully be made available to backers within the next few weeks.

Alyeskan Tales is getting a revamp and update.

Included in the new edition is a revised version of the Alyeskan Job story and a completely new story called Jinx. Kickstarter backers will be the first to get their hands on the PDF version before the files on DriveThru get updated.

Hoping to get a Cold War Skirmishes PDF out around April time that covers the 1982 Falklands War. Included will be details on the conflict, timeline of events, gear and Role Play suggestions. Its intended to be a PDF-only product and so will likely be available as Pay What You Want.

The Odd Angry Shot book, that covers the ANZACs in Vietnam, is still intended to be released. More details on this possibly later in the year.

As for events this year its not certain whether I'll be attending any.

Local show Diceni is back on this after, though its format is being changed and I've been given no guarantees that I'll get a spot. NOR-CON later in the year another local show I'm hoping to do, though that'll be only as a trader.

On the national level there is UK Games Expo, but at the moment it seems the only way I'll be able to attend is spend the entire weekend running games (well enough to qualify for the free hotel room). There is also suppose to be a UK based Savage Worlds convention, but I need to look into that.

A pipe dream at the moment is attending one of the US conventions, probably GhengisCon which I've heard has a big Savage Worlds presence.
Posted by Stephen 'Stormwell' Hughes at 04:28