Nestled to the south of the Artian Confederation is one of Darmonica's few surviving small countries; Pamdinia.

Wedged in between the Mammut Sea to its south and the Odin Mountain Range to the north, Pamdinia is a long but narrow country with few natural resources. It managed to stay neutral during the Great Darmonican War, primarily due to its status as a major trading partner of the Sultanate of Taramate and the strong Pamdinian Navy. 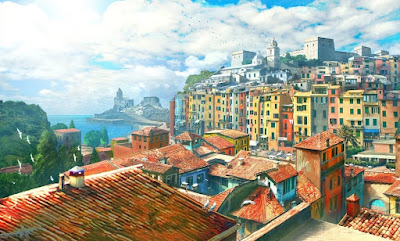 Pamdinia is very much a maritime country, its has a long coastline and its land borders are mostly mountainous which forced the country to look to the sea. It established trading routes across the Mammut Sea to many ports and gradually became the nexus point of trade between the northern Darmonican countries and the Sultanate to the south. The construction of the Trans-Pamdinian Railway provided an alternative land route between the Kingdom of Tyland and the Holy Sodkan Empire than going through Artian territory. The Trans-Pamdinian Express was a popular train service linking east and west thanks to Pamdinian neutrality in numerous conflicts that engulfed Darmonica.

The Pamdinians are well known for their extensive maritime trading routes, their long standing neutrality and their strong navy. Though recent upheavals have effected them; trade was greatly affected by the war and the reshaping of power in Darmonica. The once friendly United Provinces (now the Coalition) have turned into fierce rivals, Tyland has fallen under Artian influence, trade with Sodkan lands to the east have fallen sharply and now the Artians are coveting relations with the Sultanate. With reduced access to raw materials such as coal and iron, the Pamdinian Navy is in danger of losing its superiority. The Pamdinians have started retrofitting their ships to use oil, a resource that they do have good access to and one that is increasingly becoming more important.

Wary of the prospect of another major war that could engulf Darmonica and even drag Pamdinina into it, the Pamdinians have been pushing for what they call 'The Darmonican League'. It is intended to be an intergovernmental organisation with the goal of preventing future wars and setting international disputes via peaceful means. The idea has support from the Free State and some Sodkan Republics, though its biggest support will come from the Commonwealth which has openly welcomed the idea but has yet to former any firm commitment to it. Potentially the League could usher in an era of lasting peace for Darmonica, though its a case of getting the idea off the ground.
Posted by Stephen 'Stormwell' Hughes at 17:12