Some back I mentioned about running a Frozen Skies campaign, recently had a character creation session or 'Session Zero' if you will. Partially because we had a new player and partial because it had been a while since we last played anything Savage Worlds related, we did a short combat to get to grips with how everything works. So this week's post will be a rundown of the characters and an after action report of the brief combat. Going forward, I'll be alternating between campaign posts and Utherwald Press related posts. 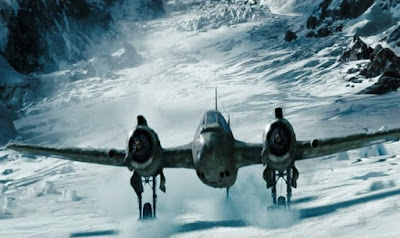 We have a crew of five characters who are to brave the frozen skies of Alyeska, complete with their own airship (more on that in a bit). They all hail from a diverse range of different backgrounds and, in one particular case, different countries.

As stated earlier, they have an airship; The Waylander

She's an old Rover-class scout airship that saw service during the Great Darmonican War and got sold off after the armistice. It sports hooks to mount a pair of fighter-reconnaissance aircraft to extend its patrol radius and for self-defence. Additionally, it boasts a pair of gun turrets armed with twin 50-cal machine guns.

At present they have a single escort aircraft; A Blackforge Marauder that's been named "Gilias".

After character creation was done and the players had sorted out their airship, we had a bit of time to run through a bit of combat. This was partially to get used to the rules again, partially to show how the system works for Herbert's player since he's new to the group and to tabletop RPGs.

The scenario was pretty straight forwards; the group ran afoul of a street gang that outnumbered them two-to-one.

Jack's player got lucky and received a Joker in the first round of combat, but elected to hold their action. Herbert's player ended up going first, got into cover behind a truck and fired off a shot from their rifle. George was next, firing a burst from his machine gun whilst Alex edged closer to the thugs and fired his revolver. Jack and Sebastion broke into a nearby building with the intent of using the upper floor as a sniping point. By the time the thugs went, one of them had been Shaken (and would remain so). The return exchange of fire from the thugs was terrible, so a good bunch of them decided to leap-frog through some cover in order to get to George and Herbert. The thug leader fired his weapon, which produced a beam of light rather than a bullet, at Alex.

Round two saw Herbert getting a Joker and going first again, this time downing one of the thugs. George's efforts with the machine gun put down a couple more thugs. Jack and Sebastion reach the upper floor, Jack then spotted for Seb by using his pair of binoculars. Allow Jack to do a Notice roll, a success and each raise then gave +1 to Seb's Shooting roll (IIRC he got a raise and so Seb got +2 to his own roll). Seb then fired at the thug leader and managed to roll 24 on his damage roll, the thug leader managed to do a Soak roll but was left with two wounds. Alex then moved up to do a melee attack on the thug leader and...failed.

The thugs continued to move forwards, but their shooting was just as ineffective as it was during the first round. The thug leader spent a benny to remove Shaken and proved just as bad in melee against Alex. Due to time constraints we had to call it quits there, though everyone seemed to enjoyed it.

Thoughts: Range and cover modifiers do have a big impact, plus it was nice seeing the players thinking tactically.
Posted by Stephen 'Stormwell' Hughes at 09:30