Alyeska is home to many outlaws; the most infamous of these are the sky pirates that have been romanticised by the newsheets. Bandits aren't unheard, though they are not seen as exciting and tend to receive considerably less attention in the press. Then there are the motorcycle raider gangs known as 'Marauders'.

HOT OFF THE PRESS! Frozen Skies will go on sale this coming Wednesday!! 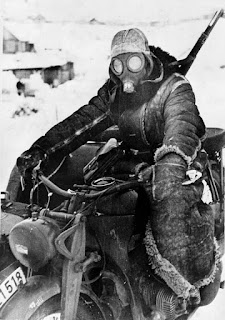 On Steads of Steel & Oil

Bandits have plagued Darmonica for centuries, typically peaking in activity following major conflicts as thousands of soldiers suddenly find themselves released from service with no job to turn to. Bandits have also moved with the times, the evolution of mechanised warfare saw increased demand for technical skills and thus resulted on a large number of those with a mechanical aptitude. The rise of the aircraft has seen many gravitate towards the sky pirate outfits that have emerged over time, though there are still those who remained earth-bound.

Marauders are outlaws who prefer to conduct their nefarious activities on the ground, usually with a motley collection of vehicles. Most marauder gangs have a couple of trucks and a fair few motorcycles, some may even have sidecars. They typically target trains, lightly armed convoys, trade caravans and even small settlements on occasion. Even the military has found that it isn't immune to marauder attacks and so has had to assign precious manpower to guard convoys and supply dumps.