Session the Third in the ongoing Frozen Skies campaign, one of the players wasn't able to make and I didn't want to run what I had planned without them. So put a few options to the rest of the group and it was decided to do a side adventure instead...well ended up being more of a mis-adventure.

Don't suppose I've ever seen so many failed rolls in a single game session. 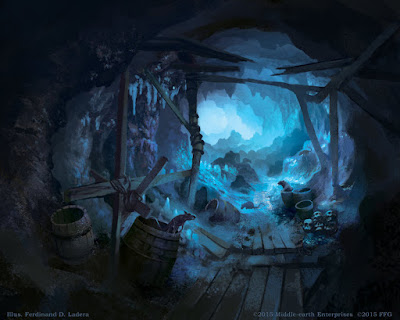 We joined our intrepid heroes where we left them, leaving a tavern after attempting to start a fight between two rival sky pirates. Tag had made the crew leave the tavern and nodded a greeting to the leader of the Banshees sky pirate gang. The crew had gone on ahead with Tag trailing a short distance behind them, though this was where ill fortune struck the crew. Broken Spires is a town built on many different levels and on the side of a mountain, it is the sort of town that would give Health & Safety a heart attack. Many of the 'roads' are just wooden walkways maintained to the standard of what the townsfolk can be bothered with (which isn't much).

The crew (bar Tag) had very little warning before the wooden planks gave way beneath them and dropped them a good 40 feet into an underground cavern. I allow everyone to make Agility rolls, though only Sebastian made a successful roll. Alex and George failed their Agility roll but also had a high enough Toughness to avoid taking any damage, Herbert took enough damage to end up Shaken. All four ended up with a level of Fatigue from Bumps and Bruises, meaning for most of the session they all had a -1 penalty on their trait rolls from this level of Fatigue.

After dusting themselves down, they discovered that they had no rope and that three passages led out of the cavern they'd ended up in. They decided to try and make their way out on foot, reasoning that somewhere there had to be an exit. They chose the left most passage and set off, managing to find a leg bone which they turned into a torch with a strap of cloth and some alcohol. After travelling for some time Alex was lucky enough to spy (just passed his Notice roll) an abrupt end to their path in the form of a ledge. Alex managed to stop the others from walking off this ledge, particularly since it was a large cavern of uncertain depth. They did find a normal ledge that led round the edge of the cavern, so with the lack of better ideas they pushed onwards.

Partway along this narrow ledge, Sebastian and Herbert ended up dislodging some rocks which fell into the cavern and the echoes of their fall reverberated round the cavern. These echoes were answered by the screeches of some strange creature. A couple of rounds passed with failed Notice rolls on both sides before the creatures, as it turned out to be a pair of Cloudhaunts, finally made an attack. One Cloudhaunt angled in on Alex, who had First Strike and whipped up his cane gun to shoot the critter in the face. The now dead Cloudhaunt's momentum meant it carried into Alex and squished him against the wall of the cavern. The second Cloudhaunt fell to Herbert's shotgun.

With both creatures dealt with, the crew pressed on once more and headed into another tunnel. Sebastian found some tracks in the dirt from rats, but thankfully no more critters put in an appearance. Eventually they came to another ledge, this time a cavern filled with glimmer rock crystals and a stream running through the middle of it. There was also a crevice in the cavern's ceiling which let in sunlight. Alex went full-on Spiderman and scaled the rockface up to the crevice and then out onto a snow covered landscape. The others, being considerably less skilled at climbing, opted to follow the underground stream in hopes of reaching the surface by a different route.

Up on the surface, Alex followed roughly the path of the underground stream and crossed over a ridge and discovered a small valley that contained a small lake. He also spotted a waterfall, which the others soon came across by following the stream. The waterfall fell from a small opening in a cliff and dropped down at least 10 feet into the lake, making it a little tricky for the others to get down. Sebastian went first, failed his Climbing roll but just managed to pass his Agility roll. Up next was George who also failed his Climbing roll, though he ended up Acing his Agility roll. Last was Herbert who, lacking the Climbing skill, decided to jump and just did an Agility roll which he managed to succeed with. The trio landed in the lake and I asked them to make Vigor rolls which they all failed, each gained a level of Fatigue due to the freezing temperature.

Luckily there was a small cave and some trees nearby, so they were able to find some shelter and get a fire going. They settled down for the night and took it in turns doing watches, Sebastian took the third watch and spotted a large figure approaching the cave before proceeding to rouse the others. They soon were able to spot that the figure was a large, muscular man wearing a bear skin cloak. The man saw the crew at the mouth of the cave and then started pounding across the snow towards them, Herbert got a shot off with his shotgun which seemed to have no effect upon the man. However, the man barrelled into Herbert and only managed to push him back a few feet in the snow.

Alex attempted to outflank the man, but was spotted and so quickly decided to hang back. George tried getting round the back of the man and stabbing him in the head, but failed miserably. Sebastian got a shot off with his rifle, but didn't seem to do much in the way of damage (the man manage to pass a Soak roll).

Second round saw both the man and Sebastian getting Jokers, a simple d6 roll-off saw Sebastian going first who got a head shot off and did another wound. Since we're using the Gritty Damage Setting Rule, I rolled on the injury table and rolled Blind but that didn't effect the man that much. The man, in turn, pummelled Herbert and left him with a Brain Damage result from the injury table. Alex moved behind the man and fired his cane gun at point blank range into the small of the man's back, Acing both the Shooting and damage rolls. Even after his high Toughness of 11 was taken off, the man still received four wounds from Alex's attack. By this point, much like the rest of the group, I had no bennies left and so couldn't do a Soak roll.

With the giant of a man defeated, the gang were still stuck in the middle of nowhere presumably not far from Broken Spires...

What was suppose to be a improvised adventure, clubbed together at the last minute, seemed to go down as a big hit. Though bad dice rolling for everyone meant that bennies got burned through at an almost scary pace.

I'll need to speak to Tag's player to see what he would've gotten up to, but I have a couple of ideas there. Hoping to give him the chance to earn some XP before the next session so that he stays about even with the rest of the group.
Posted by Stephen 'Stormwell' Hughes at 06:30