This particular post was going to be another installment of the Frozen Skies campaign I'm running. However, half the group wasn't able to make and so the session got cancelled. Hopefully in two weeks time it'll be the next bit of the campaign.

In the meantime, I've had to think of a different topic for this week's post... 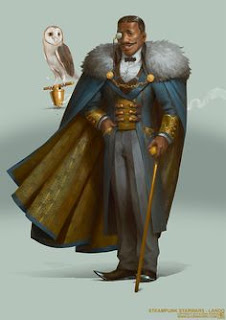 As has frequently been stated before, Alyeska is home to a wide range of individuals from different backgrounds and of different professions. Among these there are a handful of secretive persons known as Brokers of Secrets.

These independent individuals make it their business to know any and all information of value, if they worked for a country they would be called spymasters. They collect information and then sell that information to the highest bidder, preferring to remain neutral by accepting coin from those willing to pay. They'll sell critical information to a client, though at the same time they'll happy sellout that client if the client's enemies pay well enough.

The Brokers are the source of high profile jobs, so they tend to be selective with whom they do business with. Though typical Brokers charge a fair amount for their fee, which functions a sort of passive filtering by discouraging bandits and ruffians. Occasionally they do contract so-called 'small fry' for jobs on behalf of clients, normally jobs that require effective nobodies to complete.

Brokers are often regarded as eccentrics, though they are wise enough to surround themselves with bodyguards. They amass a fortune, thus allowing them to fund a small army of bodyguards and maintain their own private compound. To further aid in defending their persons they acquire a few tricks and gadgets only known to them.
Posted by Stephen 'Stormwell' Hughes at 06:30