Go Forth With Session Four!

A full house again as Tag's player joined us after having to miss the last session, thus enabling much advancement and development of plot. These past couple of sessions have proven that great flexibility as a GM is required as what I had planned to happen and what ended up happening because of circumstance were two different things. Though managed to get things pretty close to being back on track in this last session, so feeling a little bit of a sense of achievement with that. 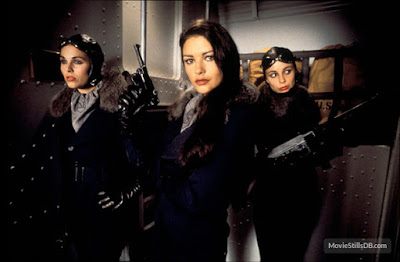 Last session saw most of the crew fall down a hole and enjoy an adventure of their own, Tag (mainly because his player wasn't there) didn't fall down the hole and so the start of the session was going through what he got up to. Seeing that he wasn't able to help the others, Tag opted to go and hire a new crew. He visited one of the nearby taverns, after spotting the female sky pirates from earlier enter it, and he spoke to the bartender about where to look for a new crew. Bartender informed him that most folk tended to gravitate towards one of the big established outfits, though there are still plenty of loners down by the air-docks who could be convinced to join.

Tag headed back to where the Waylander was berthed, found a crate to stand on and started a showman routine to attract potential recruits. Though he didn't have the Persuasion skill and thus had to roll it unskilled, I let him have a +2 bonus as he role-played his recruitment pitch. I then said a success on the roll would give him two new recruits and each raise would give him another recruit; he managed to get a couple of raises on the roll and so gained four new recruits. He got the new recruits billeted away on the airship and then set about drawing up plans for tackling the poachers.

One of the female sky pirates from earlier was spotted loitering around outside the airship, so Tag went over and spoke to her. The sky pirate informed Tag that her 'boss' would like very much to speak to him and asked him to follow her back to their own airship. Enroute, the sky pirate pointed out the skyship the crew had spotted when they first arrived in Broken Spires. She then pointed out an airship near to it as belonging to her outfit, then said that the skyship belonged to one of the local crime lords who've dubbed themselves 'Sky Captains'. She also told Tag that the Sky Captains were not people to be messed with and it was generally a good idea to steer clear of them.

Eventually Tag was led to the Banshees' own airship, the Raven, and taken aboard. Among the things Tag noticed were; a hanger fitted with 12 fighters that seemed to have some sort of box underneath their noses, the airship seemed to be maintained to near enough military standards and the crew appeared to be well disciplined in addition to wearing roughly the same basic uniform. He was finally taken to the quarters of the Banshees' leader who identified herself as 'Captain Rogan'. Having introduced herself, Captain Rogan said she'd heard about the misfortune of Tag's crew and that she had a proposition for Tag; She would help Tag in exchange for an undisclosed favour to be called in at a later date.

But first she wanted to know why Tag and his crew were in Broken Spires to begin with, which Tag told her was to do with a gang of poachers led by a certain Travis Perkins. Rogan admitted that she was aware of the gang, that they were independent and that she was more than happy to help take the poachers down. With support from the Banshees agreed, Tag was escorted out but he took the opportunity to take in as much details as he could about the Banshees' airship. Tag then did a recce on the poachers' compound and began hatching a plan.

Out in the wilderness, the rest of the gang spotted a pair of aircraft that turned out to belong to the Banshees. The pilots informed the gang that they'd been ordered to look for them, this was part of the 'help' that Rogan offered. The gang were given a lift back to Broken Spires, though cramped and uncomfortable which required Vigor roll to avoid a level of Fatigue from Bumps and Bruises.

Tag and the gang were reunited, though the meeting was tinged with a pinch of awkwardness as Tag was prepping the new crew for the upcoming attack on the compound. Tag quickly filled them in on the plan, though it was clear that Herbert had a head injury (from the previous session) and so had to sit this one out (his player played one of the new NPC crewmembers).

The first part of the attack on the poacher's compound was the Banshees' airship conducting a bombing run against three of the four guardtowers of the compound. The first tower was damaged and its occupants killed, the second tower was completely obliterated whilst the third tower was largely unaffected as the bombs went wide and hit the building Sebastian and a crewman were sniping from. Sebastian and the crewman sniped the fourth guard tower, managing to down one of the two guys within it and resulted in a drawn-out sniper duel for the rest of the battle.

The rest of the gang commandeered a truck and crash their way in through the gates of the compound, George manned a heavy machine gun fitted to the back of the truck and mowed down everyone in the courtyard. The others dismount and take cover by the trucks parked in the compound, all took potshots as Tag's other crew and a squad of the Banshees charged in behind the gang. George raked the loading bay of the sole building within the compound, gradually counting for a good number of the poachers. Tag's other crew supported the gang as they moved up to the center of the loading bay, the Banshees flanked round to either end of the building. Alex attempted an Intimidation roll which seemed to have marginal effects.

By this point Alex had taken a wound (guts on the Injury Table), plus Sebastian and his crewman companion were in a sniper duel with the survivors of the third tower. It was the Banshees who stormed the building and mowed down the surviving poachers, thus allowing for the gang to move in and help secure the building. When he entered the building, Tag called out for Travis to show himself and got a hail of bullets as a reply which did two wounds (again, guts result on the table). Tag then ordered everyone to open fire on Travis, it was the crewman controlled by Herbert's player who managed the 'killing blow' by acing his damage roll and brought the poacher low.

Travis managed to pass a Vigor and though he took an injury to the guts, it was only temporary. Tag ordered the crew to load what they could onto the trucks, which included five dragonhawk eggs. Travis' fate was to be brought before Captain Rogan who had him thrown into the brig to stew until she decides what to do with him.

The crew of the Waylander then made preparations to leave Broken Spires, though they were already forming plans to sell one of the eggs....

As I said earlier, things happened differently to what I had planned. Ultimately things got back onto track and the adventure is pretty close to being wrapped up as planned.

I had expected the group to seek to sell some of the eggs, especially when they learnt the value of the eggs on the black market. It looks like they'll try to sell at least one of the eggs and hand the others to the windryders. Least it seems that they'll get some interaction with the windryders.

Tag's player wishes to acquire a bigger airship and go more independent (they're currently working for a logging company), though the legality of his and the groups' future adventures remain to be seen. They do have a job from Ardan Gowan waiting for them.
Posted by Stephen 'Stormwell' Hughes at 06:30