Part of an ongoing mini-series where I take a look at the fluff of the wider world of Frozen Skies and possibly revise it. As the main power in Alyeska, it made sense to start with the Commonwealth particularly as there were some parts of it that I wasn’t fully happy with. The next step was looking at the Commonwealth’s military and making changes where I had new ideas, in this instance a complete revision of the Commonwealth’s air forces. 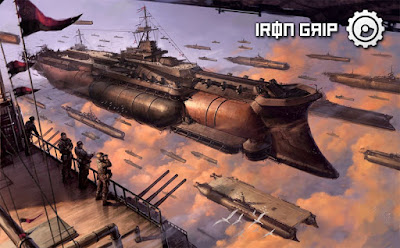 The Royal Aero-Fleet, RAF for short, is the air arm of the Commonwealth’s military. It has under its command skyships, airships and aircraft of various different types from fighters through to bombers and transport craft. It is organized into a number of different ‘commands’ such as Fleet Command, Fighter Command, Bomber Command, Transport Command, etc. Below the various Commands in descending order there is Fleets or Groups (dependent on aero-vessels or aircraft), Wings, Squadrons and Flights. In addition there are a number of air bases called stations that either come under the control of a specific Command or host units from different Commands. These stations are typically named after the nearest settlement of note, for example Royal Aero-Fleet Station Corbhen (RAF Corbhen for short) is named after the nearby town of Corbhen.

Squadrons of aircraft range from 12 aircraft for a fighter squadron through to nine for a bomber or transport squadron, though they are usually further broken down into flights. Two to three aircraft squadrons typically make up a wing, in turn at least two wings form a group. A wing is normally the largest grouping of aircraft found on an aero-carrier, though groups of multiple wings from different aero-carriers may be formed on a temporary basis for specific missions. Likewise, a wing is also the largest formation that can be found at a RAF station with a number of stations coming under the command of a permanent group HQ.

Ranks of the Royal Aero-Fleet

Like any military force, the Royal Aero-Fleet boasts a number of ranks ranging from enlisted ratings through to commission officers.

The enlisted ranks will also have a ‘rating’ denoting their specialization such as Machinist’s Mate 2nd Class for example.

The Royal Aero-Marines, nicknamed the 'Rams',serve as the infantry troops of the Royal Aero-Fleet and serve in a wide range of roles. They serve onboard skyships either to maintain security onboard, take part in boarding actions and even man some of the aero-vessel's weapons. On the ground they protect RAF bases and installations, either by helping to maintain the security of the base or actively defending it by manning anti-aircraft weapons. The Rams are part of the Royal Aero-Fleet, though they use traditional army ranks instead of the RAF's own rank structure. Only differences in ranks is that the Rams use Gunner for the rank of private and Flight Sergeant for its Staff/Colour Sergeants.

Relatively new weapon introduced by the Commonwealth following experiences during the Great Darmonican War, it is used by both the Rams and the Wolfbane Commandos as well as other specialist units. It is effectively a bullpup assault rifle, having a shorter overall length whilst maintaining a full length barrel. It is a compact weapon ideal for the close-quarters that the Rams fight in during boarding actions.