Following on from the train heist, the crew ended up in a casino....though not for another heist. This was the crew's first shot at bounty hunting, which they managed to successfully pull off. It proved to be Beginner's Luck and the Jackpot for one of the characters, whilst another may have brought the wrath of the local taxi drivers' union down upon the crew. 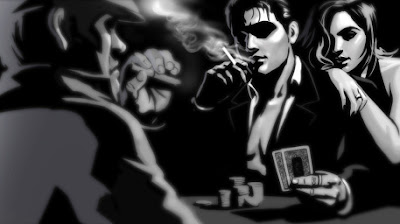 Along Came A Bounty

Jacob had sought out some bounties for the crew to try an attempt, managing to get six potential targets to go after.

'Hawk' - A serial killer at large in the Alyeskan Outlands.

The Crows - Gang of kidnappers.

Kaelin had been reported to recently have been in Gravenburgh, she was considered an 'easy' target and a good one for Sebastian to gain some bounty hunting experience to go with his newly acquired licence. The crew decided to split into two teams; Team 1 consisted of Alex and Sebastian whilst Team 2 was made up of Herbert, Jacob and Reginald. Alex used his underworld connections and found out how Kaelin operated, that she tended to target older men with more money than sense with a fondness for both drink and the pretty ladies. So the crew suited up and headed out for a night on the town, with the teams each going to different casinos.

Team Two went to one casino, though whilst it had the right sort of 'marks' that Kaelin would go for there was a distinct lack of female company present. Herbert decided to go and try to speak to one of the gamblers, but only took a couple of steps before Jacob yanked him back. In no uncertain terms, the bounty hunter told Herbert to keep his mouth shut and eyes open. Reginald also got ordered to make sure that the good doctor stayed out of trouble and was given a set of knuckledusters to aid with this task. Jacob then discreetly talked to the casino stuff in hopes of getting a lead on the genchi con artist.

Meanwhile, Alex and Sebastian were checking out their assigned casino. This one proved to be more livelier with a stage show and plenty of men with female companions. Sebastian headed over to the bar and brought one of the more expensive drinks, effectively making himself bait to draw out Kaelin, then made his way over to the gambling tables. Alex worked the room and made a mental note on the security arrangements, plus the nucleus of plans for a later date. Sebastian’s first round proved to be a case of beginner’s luck, though he didn’t fare too well in his next couple of games.

It was at this point that Alex had managed to swipe round £100 of chips, then threw them in the air to cause a distraction. Alex’s intention was to see the response from the casino’s security, use the opportunity to grab a deck of cards from an unmanned table and then finally see if it drew Kaelin’s attention. For his efforts, Alex was rewarded with a deck of cards marked with the casino’s logo and a glimpse of a woman nearby. This woman had a feather fan obscuring her face, though she lowered it just enough for her to glance round and for Alex to spot the green pointed ears that marked the woman as being a genchi. Alex then had a telephone call put through to Team 2 at the other casino and alerted them that Kaelin may have been found.

Team 2 then piled into a taxi, its driver giving then estimate of half an hour for the journey. A stern look and some carefully chosen words from Jacob had this estimate revised down to 10 minutes, in addition to half fare no fare. Team 2 arrived at the second casino to meet up with Alex and Sebastian, though Herbert decided to head back to the airship and got back into the same taxi that Team 2 had arrived in. Once again the driver quoted half hour for the journey, but Herbert felt like ranting and told the driver everything that the crew had gotten up to. Everything.

Five minutes later, Herbert was back at the airship after another free taxi ride.

The rest of the crew, blissfully aware of a potential future meeting with the Gravenburgh Taxi Driver’s Union, set about forming their trap for Kaelin. Sebastian went back to the tables, having received some advice. His next game went well, then he decided to raise the stake that caused couple of the players to quit and have their places taken by Kaelin and Jacob. Two rounds later, Sebastian had amassed over £20,000 in winnings and offered one of the casino’s primer suites for the night. Sebastian then watched some of the stage show before heading up to his suite, though noted Kaelin watching him the entire time.

Alex and Jacob kept a close on Sebastian as he headed upstairs, though they had a harder time tracking Kaelin as she vanished into the crowds a couple of times. Sebastian, aware that he was being followed, acted drunk and ‘stumbled’ his way to his room. Fortunately, he was able to catch a glimpse of Kaelin and carried on acting drunk. On reaching the door to his room, Sebastian pretended to fumble with the key and cursed out loud. Kaelin came over, smiled and said. “Honey, you put the key in like this and turn it.”

Quickly dropping his façade of drunkenness, Sebastian grappled Kaelin by grabbing her arm. The genchi was agile enough to get her arm free, though Sebastian landed a blow that made her stagger back. Unnoticed, Alex then whacked Kaelin round the head with his cane and knocked her clean out for a couple of hours. Jacob produced some handcuffs and then carried the unconscious genchi into the room where he used the hotel phone to call the police. Alex and Reginald made their exits, though Jacob stayed long enough to hand Kaelin over when the police arrived.

Having been offered the suite by the casino, Sebastian opted to stay for the night.

Oh boy, what a game.

First Herbert’s Big Mouth Hindrance comes into play a couple of times and then BOTH Alex and Sebastian drew Jokers for the confrontation with Kaelin. Tactical use of Adventure Cards by Alex’s player meant that he was effectively able to ‘one shot’ Kaelin to ensure that she went down. Though, aside from breaking free from Sebastian’s grapple, Kaelin never got to act but her high Parry did cause some problems for the characters.

I also now have a few plot ideas to work with, though the players expressed a wish to head back to the Home Isles to pursue their own plot to do with Reginald’s family.
Posted by Stephen 'Stormwell' Hughes at 06:00