This week we’re heading back to Cold War Skirmishes, mainly going over some stuff and updating them to SWADE. Recently released an adventure through the Savage Worlds Adventurer’s Guild called Operation Thule; Set during the 1982 Falklands Conflict and featuring some Weird elements to showcase the potential of what came be run in the…erm…’setting’. This post builds upon Operation Thule by providing extra gear and vehicles to broaden the scope for a British military based game during the Cold War period. Do intend to cover the other powers and nations such as the Soviet Union and USA; I know more about the British military, which makes it a better starting point for me. 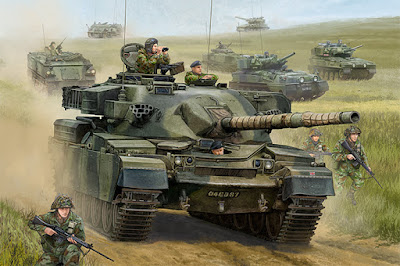 During the Cold War period, four different type of helmets were issued to British forces. The standard issue British Army infantry helmet was the Mk V ‘Turtle’ helmet, itself a development of the Mk III first issued in WW2 to replace the Brodie Helmet. Depending on stocks, the Parachute Regiment had the choice of either the WW2 era Mk.II Paratrooper or the Glass-Reinforced Plastic M76 Para helmet (direct forerunner of the later Mk.6). The Navy and the Royal Marines used another WW2 era helmet, this time the Royal Armoured Corps (RAC) helmet. Though, the Royal Marines would also receive some of the Mk V helmets when there were limited stocks of the RAC helmets available.

The British didn’t really use body armour outside of Northern Ireland, even then it was a Flak Jacket based upon the ones used by the Americans during the Vietnam War. The initial batch of Flak Jackets acquired by the British at the start of the Northern Ireland Troubles came from American stocks, in some cases second- or even third-handed from Vietnam.


The Browning Hi-Power was used as the standard sidearm by British forces.

EM-2 (7mm)
The EM-2 was a late 1940s British attempt at creating a bullpup assault rifle, influence by experience and extensive studies during WW2. The rifle,a dn its ammo, was briefly adopted in 1951 but fell foul of a desire for NATO standardisation.


The L1A1 ‘Self-Loading Rifle’ (SLR) was a semi-automatic version of the FN FAL and the standard rifle used by British (and Commonwealth) forces during the Cold War period.


The SUIT was an optional scope for the L1A1 SLR and was issued to designated marksmen, though it was not designed as a sniper scope. It was unusual that that it used an inverted sight and thus used allowed very rapid target re-acquisition by leaving a clear sight picture under the inverted pointer when the rifle's barrel was raised by the rifle’s recoil. Additionally, it used tritium-powered illumination so that it could be used in low-light conditions.

Rules: Scope (providing the normal +2 to Shooting at Medium range or higher), halves Dim and Dark Lighting conditions (round down). Grants an additional +1 to Shooting in the round after the shooter fired an Aimed shot long as the shooter fires at the same target.

After WW2 the British Armed Forces retained many Lee-Enfield rifles that had been adapted as sniper rifles. When the L1A1 SLR was adopted as the main British infantry weapon, a number of these Lee-Enfield sniper rifles were converted to 7.62mm NATO. It remained in service until it was finally replaced in the 1990s.


The M16 family of rifles saw use by British special forces units, though the variants used did not have the ‘burst’ fire mode.


A submachine gun of British design, that first saw use at the end of WW2, used as a support services weapons (i.e. tank crew, engineers, artillerymen, etc). The suppressed version was used by special forces such as the SAS.

Suppressed Variant: -4 penalty on listen based Notice rolls to hear weapon being fired.

Carl Gustaf Recoilless Rilfe
An older and heavier version of the AT-4 (use same stats but change weight to 31lbs) that is still in service today. Reported used by Royal Marines against an Argentine warship during the Falklands Conflict.


Conversion of the WW2 era Bren Gun to fire 7.62mm NATO rounds. It was preferred over the GPMG due to its lighter weight and was withdrawn from British service in the 1990s following the adoption of the 5.56mm NATO round.


Issued at various times to British units as a close infantry support weapon.

Saracen APC
Wheeled APC introduced into British service in the 1950s, some versions were also used by the Hong Kong, South African and some American police forces.


Another member of the FV430 series, the FV438 Swingfire were basically FV432 APCs converted to carry Swingfire anti-tank missile (capable of making a ninety-degree turn immediately after firing) launchers. The FV438 carries a double missile launcher with 12 more missiles in the hull. The launcher can (unlike that of the Striker) be reloaded from the inside. An interesting feature of this vehicle was that it could be fired remotely by a crewmember located up to 100 meters away from the vehicle, allowing it to stay completely hidden while firing.


The Centurion, the first main battle tank developed by the British during the latter half WW2 and considered one of the most successful post-war tank designs. First saw combat in the Korean War and was later used by the Royal Australian Armoured Corps in Vietnam, also the only known tank to have survived a nuclear blast. Variants are still in service with Israel and South Africa.


This is an Australian modified version of the British Centurion MBT, these saw extensive service in the infantry support role during the Vietnam War.
Size: 9 (Large); Handling: -1; Top Speed: 22 MPH; Toughness: 36 (18); Crew: 4

Chieftain Mk.3
A development of the Centurion, the Chieftain was the main British battle tank from the 1960s until replaced by the Challenger I in the 1990s. Some versions remain in service with other nations. Though the tank was notorious for having engine problems and breaking down, this was addressed in later models.