Certainly a few things that I could've done differently or better with my Frozen Skies campaign, things I'm sure that my players can pitch in on. So this week I'm taking the chance to address the things that come to mind for me and what, if possible, could've been changed. Will also post about ideas I have forming for my next Frozen Skies campaign, no matter the format that takes. 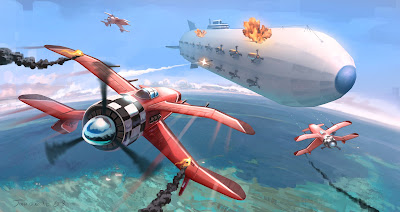 First thing that comes to mind is the plot.

I had a couple of adventures pre-written before I started the campaign, though soon found that I needed greater motivation for the players (i.e. helping out Taran's Bluffs). Admittedly after that I played things a little loose, offering the players jobs to but letting them drive things forward. It did mean that the build-up to the planned Broken Spires plotline was slow and eventually sidelined, though the plot created and driven forward by the players themselves ended up being fun and interesting.

The issue here, to me, seems split between pacing and striking the balance between GM Railroading vs Player Freedom. I will also have to raise my hand and admit my guilt of a degree of GM laziness as well. It probably would've helped if the characters' backstories were more interlinked and the characters more established as a crew prior to the campaign, plus it much more clearer as to who the captain was (and being stronger in that role).

The ideas I have for my next Frozen Skies based campaign is based on a PBP RP I took part in where the characters were part of a squadron of commando pilots going on special ops and covert missions. Sort of similar to the video games Secret Weapons Over Normandy and Blazing Angels 2: Secret Missions of WWII. It will be a military based campaign, so by its nature it will be more rigid with a chain of command so that its easier for somebody else to take over if the commander gets taken out.

My choices for running it could have it set during the Great Darmonican War or the present era, the latter would see more of a focus on fighting sky pirates and Cold War style black ops.

Probably more likely to run it with a different group in a Play-By-Post format, but we'll see.
Posted by Stephen 'Stormwell' Hughes at 06:00