There are a handful of plotlines I had planned for my Frozen Skies campaign, but never got the chance to do much with these. Big focus of some of these revolved around the sky pirate haven of Broken Spires; which got teased but no follow through. So this week we'll take a look at these and what could possibly had happened had the campaign continued. 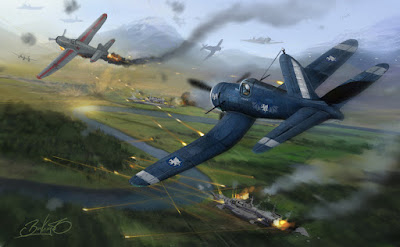 The crew first learned about a possible Commonwealth campaign against Broken Spires on their first visit to Spitsworth Manor, though this was in the form of letters about seeking justification for a military operation. There was no confirmation that an attack would go ahead, but the crew took it as read that something would happen. They tipped off Natasha Rogan, leader of the Banshees gang, and the crew looked like they would take steps to prevent the attack...least until Tag's death.

The crew were going to be used to provide justification for the attack on Broken Spires, particularly after they'd dabbled in sky piracy and everything had been setup for the Conspiracy plotline to advance. Andrei, the Tylander broker of secrets they'd been working with, would have given them another airship heist job to pull off. Though this time it would've been stressed that there was a time limit for the job, so one that had to be done there and then rather than postponed. The job involved an airship named the Ogman's Hand flying out from Broken Spires, though they would discover Andrei's information was faulty as the airship had a far bigger escort than the crew was told.

When the crew started their attack, particularly when they tried shooting out the airship's engines, the Ogman's Hand would explode. Couple of the crew would realize that this was impossible, plus would of the airship's escorts would then try to escape (probably done as a Chase). Later, when the crew reached one of Alyeska's main settlements, they would learn that the Ogman's Hand was carrying none other than the prince consort.

Effectively they would now be wanted for treason by the Commonwealth.

Their options would be trying to expose the conspiracy, though that would require them gathering extra evidence to prove their case and thus a trip to the Home Isles. Other options would've been to defend Broken Spires against the attack or striking a course somewhere beyond the Commonwealth's reach.

Another Broken Spires related plot was a power play amongst the 'big shot' sky pirate captains to seize control of the pirate haven. This was something introduced by Natasha Rogan, though something the crew sat on for a while and Natasha was going to force the crew's hand with regards to it by making the crew enemies of one of the other sky pirate captains.

This one was more open ended, they could've picked a side or joined in for themselves.
Posted by Stephen 'Stormwell' Hughes at 06:00