This week is an update on the current status of Frozen Skies and its update to SWADE. Been posting ideas about some changes to the setting, haven't haven't covered the mechanics side of things all that much. So taking the opportunity to bring everyone up to speed on how things currently sit. 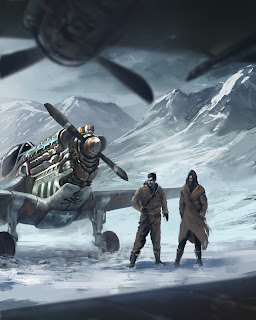 
Progress has been a bit on the slow side; a combination of SWADE finally being released, stuff going on with family life and the dayjob means updating Frozen Skies has ended up sliding onto the backburner. Though writing blog posts has helped to get some ideas down, least I forget them. Presently I can only say that the SWADE version of Frozen Skies will be out some point next year.

Either way, here is the current version of the updates though these will still change; https://drive.google.com/file/d/1H3Hrg-YoFCNUOTmNwmuWy36gRyySpM4h/view?usp=sharing

On a related note here, the Frozen Skies Jumpstart for SWADE will be updated soon as changes were needed to update some stats to bring them in line with the release version of SWADE.


So folk should, hopefully, be aware that I've been going over and revising aspects of the setting. Changes include updating some Edges in addition to removing others and adding new ones. The Wulftouched Hindrance has been completely overhauled and now functions similarly to the Harrowed in Deadlands, which should make it more interesting to take.

Another big change is going to be Weird Science, chiefly how Ancient Tech devices will work now. Somebody suggested to run them like Ultra Tech in the SciFi Companion; effectively a -2 penalty for minor devices and -4 for major ones along with completely redoing related Edges. It got me thinking whether to include some sort of card based system to determine what sort of Ancient device the players come across, like Spades for Weapons, Hearts for Protection and so forth. This should help GMs create Ancient devices on the fly and make things exciting with the random factor and chance.

Least thats a few ideas I have, but I'm welcome to suggestions.
Posted by Stephen 'Stormwell' Hughes at 06:00