Recently got to run my Operation Thule adventure that I released for SWAG, a Weird Wars style adventure set in the early '80s. It was also my first proper adventure that I've run under SWADE, which despite the changes from SWD felt like coming back to an old friend. Certainly made a nice change from the Rogue Trader game I've been running for the past few months. 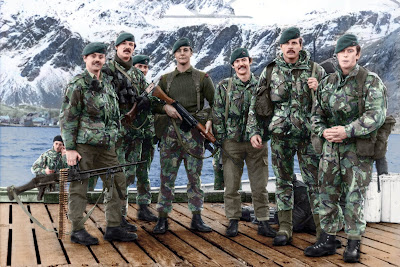 Our adventure begins on the 22nd May 1982, not long after the British Taskforce managed to put troops ashore at San Carlos. The characters get called together by a Colonel Mcguire who explains that an enemy commando team has been spotted some miles to the east and intel suggests that this team may be looking for something, London fears it may be a weapon like mustard gas. The characters were given the chance to ask questions, assigned a Land Rover and told to prepare their kit before heading out.

'Jock' - The 'not quite' Scottish sniper.

'Sparky' - The Royal Engineer sapper from the Midlands (though didn't come into play until later).

'Wings' - The commander with childhood dreams of being a pilot.

As the characters prepared to head out, they were interrupted by an air raid as a couple of enemy jets come in low overhead. Thankfully the jets were more interested in the ships off-shore and brave the hail of gunfire from the ground to do a couple of passes before withdrawing to the west. Once things had quietened down, the characters set off but they only had a couple of hours of daylight left and the sun was already quite low to the horizon.

The boggy and rocky terrain made the going slow, often forcing them to drive little more than five miles per hour. Though they ended up making better time than expected and civilians in a lone farmhouse gave the characters some pointers on what route to take along with some intel on enemy forces. Cheerfully sent on their way by the civilians, the characters reached the Wickham Heights mountain range not long after nightfall and set up a biovuac in a crevice in the rockface to use it to provide some shelter from the worsening weather conditions. Wings detailed a watch rota and they then settled down for the night.

Wings and Jock took first watch, though had an uneventful few hours until they warily handed over to Jones 79 and Lofty. An hour or so later Lofty spots a creature moving around like a kangaroo and growling, though the noise sounded unlike a dog and no predators were known to be on the islands. Lofty informed Jones that he'd spotted something and that he was going to investigate, leaving Jones to rouse the others. The Cockney scout soon found some strange looking tracks, but had difficulty trying to actually spot the creature which slipped through the darkness unseen.

Suddenly Loft found himself being barrelled over by a creature only slightly smaller than he was, but was ferocious as any wild animal as it madly trashed and clawed at him. Hearing Lofty call out, Jones told the other two and hurried out to find his comrade with torch in hand. Seeing Lofty on the ground wrestling with some...creature, the Welshman calmly sets up his Bren Gun and blasts the creature off the Cockney with a hail of gunfire. Despite being dead, the creature was a disconcerting sight from what they could see from the light of their torches. Daylight didn't bring any reassurances and the squad decided to load the creature into the back of their Land Rover for specialists to take a look at.

After a new day had dawned, the characters set off again and only managed to travel a couple of miles down the track until a rock slide blocked their path. Wings ordered the squad to proceed on foot with Lofty scouting ahead, the scout soon topped a rise and spotted a couple of civilian looking Land Rovers along with a couple of enemy commandos outside of a cave entrance. Quietly slipping back, Lofty informed the rest of the squad what he'd seen. The squad moved up with Jock taking up an over-watch position on the rise whilst the others tried sneaking closer to the cave, though the enemy spotted them and opened fire. Wings was cut down in a blast of gunfire, though Jock got some revenge by taking down one of the enemy with a headshot. The second soldier was cut down with a hail of machine gun fire from Jones whilst Lofty tried taking out the Land Rovers with a grenade.

More enemy soldiers charged out of the cave, though a sergeant was downed by Jock who scored another headshot. Jones' Bren counted for some more enemy soldiers, whilst Sparky (played the person who'd been playing Wings) counted for another. There were two soldiers left in the entrance of the cave, Lofty tried throwing a grenade at them but was shot and killed for his efforts even as the grenade flew true and took out the two soldiers. With Jock remaining outside, Sparky and an injured Jones charged into the cave. Jones got cut down by a burst of gunfire from an enemy officer who'd been in the cave, though Sparky took the officer out with a shot from his SLR. Then a German, who'd been leading the enemy team, attacked by throwing a ball of energy at Sparky which narrowly missed. Realising the intelligence value, Sparky acted quickly and knocked the German out with the stock of his SLR.

All that was left was for the two survivors, Jock and Sparky, to stock of their situation, secure their prisoner and gather their dead comrades before radioing for an evac via helicopter. Inside the cave was a stone idol, one that curiously resembled a squid....
Posted by Stephen 'Stormwell' Hughes at 06:30