This week it is the turn of the Iron Collective to receive the 'Revisited' treatment. Again this is another nation that I'm largely happy with how it currently stands, save perhaps for tweaks and refinements here and there. Though I do have an idea for a possibly big addition to the lore of the Iron Collective. 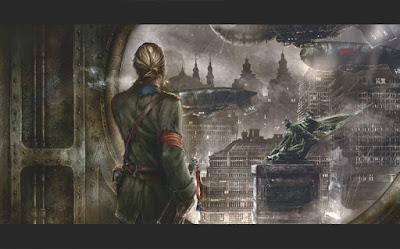 The Order of the Great Machine has virtual control over all aspects of life within the Iron Collective, having completely rebuilt Sodkan society after assuming power in the wake of the Holy Sodkan Empire's collapse. The radical changes made by the Order are unheard of in other nations and strangely the Collective's citizens seemingly accepted them without question soon after the Collective was formed.

The secret of the Order's total control pre-dates the founding of the Collective, technically even the Great Darmonican War and possibly even the founding of the Holy Sodkan Empire. At some point in the Order's early existence one its members stumbled across data about the Ancient Terrans' methods of maintaining control over its slave labour force, something that was brought to the attention of the Order's hierarchy. It was revealed that the Ancients used a special chemical in the labourers' food coupled with a combination of radio signal based mind control and subliminal messaging.

It took a series of experiment before the Order managed to replicate the Ancients' technique and a plan was hatched to put the technique into action. By this point the Holy Sodkan Empire was embroiled in the Great Darmonican War and rationing was widespread, being particularly harsh for the Empire's working classes. The Order decided to take advantage of this situation by opening up soup kitchens in various towns and cities, the special control chemical being implanted in the food given out by the kitchens. Once the Order was confident enough that even people had eaten the tainted food, the next phase of the plan was put into action.

Radio transmitters and broadcasts were set up by the Order, gradually increasing in coverage as the soup kitchens were expanded. Soon enough those who'd eaten the tainted food were slowly being brainwashed by the Order, this was helped by widespread disgruntlement of the way the war was going and was something seized upon by the Order. Fuelled by the Order's efforts, unrest began to grow across the Empire as the Order sought to weaken the Imperial Government before seizing control.

The Blast and resultant death of Empress Polinia Serlov came as a surprise to the Order, though it wasted no time in taking over. With much of the citizenry under its control, the Order quickly instituted the Classification system to help realise its ambitions. Though it became apparent that some people were resistant to the Order's mind control techniques, prompting them being called the Unclassified. Whilst those who end up being Declassified stop receiving the tainted food that aids the Order's control over the person in question, usually resulting in people slowly been 'weaned' and thus breaking free of the Order's control. This is typically why the Declassified are either killed on sight or deported to a prison camp to prevent them from openly rebelling against the system.

Even foreigners eating the food within the Collective and staying within range of the many control transmitters are at risk of falling victim to the Order's control, giving rise to a number of so-called 'converts' within the past few years. There are rumours that the Order may be expanding its control outside of the Collective's borders, quietly subverting the populace of neighbouring countries.
Posted by Stephen 'Stormwell' Hughes at 06:30