This week is bit of a break from Frozen Skies, instead we're focusing on one of my various other setting ideas. In this instance it's the turn of Cold War Skirmishes, a project that covers the Cold War period between 1945 and 1991. The aim is to cover various nations and conflicts, particularly the lesser well-known ones. This particular post is something I've planned to do for a while and concerns a Chinook helicopter in British service; Bravo November. 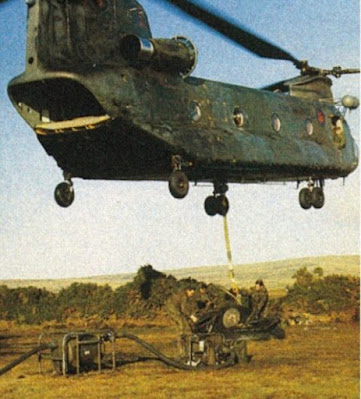 Bravo November ended up being the only serviceable heavy-lift helicopter for British forces during the duration of the conflict, whoever there was no spares, service manuals, lubricants or even tools for the helicopter. Even so, it was able to carry some 1,500 troops, 95 casualties, 650 POWs and 550 tons of cargo.

The first of four Distinguished Flying Crosses for pilots flying the helicopter was awarded during the Falklands Conflict. Piloted by Squadron Leader Langworth on a night mission, the helicopter landed in the sea at around 100 knots. Spray from the impact flooded the engine intakes, but Langworth and his co-pilot managed to get the aircraft airborne once again. However, Bravo November suffered some fuselage damage along with a lost antenna and even the co-pilot's door when the crew considered bailing out of the ditched aircraft. Loss of the door meant the crew weren't able to navigate or communicate with ground forces, yet keep flying until the end of the conflict and received a replacement door from a captured Argentine Chinook.

The second DFC awarded was earned during the Iraq War, the aircraft being the first British helicopter to land Royal Marines ashore to size oil-pumping facilities before they could be destroyed by Iraq froces. Bravo November was flown by Squadron Leader Carr, who had to fly at 100ft or less with restricted visibility due to the dust kicked up by American armoured forces.

Third and fourth DFCs were awarded during the Afghanistan conflict. The first by Flight Lieutenant Wilson who remained on duty for a 24 hour period making frequent flights to ferry both reinforcements and wounded troops. Final DFC was awarded to Flight Lieutenant Fortune who received a head injury from a ricocheting bullet whilst attempting to land in a 'hot zone' whilst attempting to rescue wounded troops, the helicopter also received numerous hits. Fortune managed to stay in control of the aircraft and fly the injured soldiers back to base, though following day mechanics found that Bravo November's hydraulics had completely seized up.

Bravo November remains in service to this day and was the subject of an exhibit at the RAF Museum London. More info can be found *here*.

Lucky: Bravo November has two Bennies for it's crew to use for any Piloting roll or to Soak Wounds against the aircraft.