For a while I've had ideas for other settings beside Frozen Skies, settings that I've posted about time and time again. One of these has been a Dark SciFi that I'd dubbed Forsaken Space, which revolved around a single system where wrecked spaceships seem to be drawn to. Though I'm mulling going into a different direction with it, hence this post. 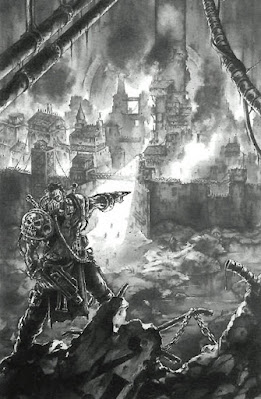 I want to take a similar approach to that I've taken with Frozen Skies, start with a location and then build upon it from there. In this instance it'll be a planet, possibly named Forsaken though that might change, either way it's a heavily industrialised world with millions living in so-called hab-clusters. In some respects these hab-clusters are similar to the hive cities of 40K.

The world itself is under the nominal control of the galaxy spanning Terran Imperial Conglomerate (TIC), but I'm 50/50 between it being our own galaxy or another. My train of thought was that Humanity was finally able to spread across the stars after discovering naturally occurring wormholes, though these wormholes each operate on their own open/close cycle which makes interstellar that much more complex. There could be some wormholes that are open for a very long period and thus form part of regular trade routes, others are only open for a brief time prompting a sort of 'gold rush' when they do finally open.

This of course means that travelling from A to B could potentially involve pin-balling halfway round the galaxy depending on how good your timing is. You've probably realised the limitations with this method of interstellar travel, particularly how it hampers fleet movements, etc. To this end I'm toying with an idea of an experiment with FTL travel that went disastrously and tore a hole in the walls of reality, prompting invasions by other-wordly entities in what is known in setting as the Rift Wars. A combination of all of the above means most worlds are effectively isolated, a lone candle against the black.

Of course all this is subject to change, some elements may get altered as I develop the setting further. But I'd welcome thoughts and comments so far.