This month we return to the world of Frozen Skies by building some background lore, something that could possibly be used in games of Frozen Skies. It builds upon the clan society of the Commonwealth that I was aiming for, in addition introduces a plot angle for people to play with. Hopefully it'll be something that folk will find interesting and, if the reception is good, I'll see about doing more of these lore/plot-hook posts. 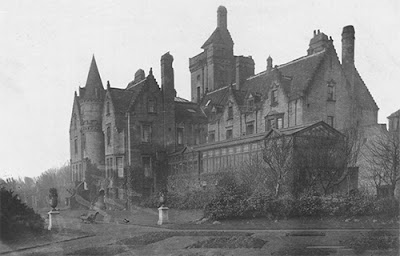 Clan Kendrick's name is oft-spoken with disgust and mistrust, the clan having fallen from grace since the events of the Finklegate Coup. Disgraced, the surviving members of the clan found themselves as pariahs far as the Commonwealth was concerned. With much of their holdings, wealth and influence gone the clan eventually re-established itself in Alyeska where it gradually rebuilt it's fortune. As a sign of it's revival, Clan Kendrick had Dunfalk House built as it's new clan seat a few miles outside of Gravenburgh in Alyeska.

Still reviled by society at large, unsurprising the clan retains deep-seated bitterness and resentment of how the Coup played out. Having long coveted the throne, Clan Kendrick has frequently sought opportunities to help it achieve it's ultimate goal. One such opportunity presented itself in the form of Banrigh (Queen) Lothwyn II whom the clan paired with one of it's own scions to be a suitor when the then young Lothwyn came of age.

Despite taking the young man, Cathal Kilmartin, into her confidence the Banrigh fell for another. The identity of this other suitor is unknown as it's deliberately been kept under wraps, though publicly it is known that Lothwyn is dating somebody. Needless to say, this has frustrated Clan Kendrick no end. The clan has spent a great deal of effort and coin in trying to identify who this person is, though they've had limited success other than a real nugget of information; they regularly travel to Broken Spires to indulge in a spot of gambling.

With this critical clue to go on, the clan has despatched agents to the pirate haven to watch out for whom the Queen's mysterious lover might be. Additionally, Clan Kendrick has hatched plans to dispose of the mystery man and has been seeking a suitable outfit of freelancers to use as the scapegoat. A number of outfits have been hired by the clan, through proxies of course, with the aim of testing their worth before the clan put it's plans into action.

That said, the clan has remained highly cautious of the Queen's uncle and Ard Tiarna (High Lord) of Alyeska; Viktor Cathmore.