The Man Who Would Be King

Already mentioned that part of the process of updating Frozen Skies to SWADE is making some changes and revisions to the setting, the intent to tighten up and make clearer the background lore. This has included giving the Commonwealth more of an Irish/Celtic feel by making some changes to how it is structured and providing Gaelic based names for different titles and organisations. This week we turn to Alyeska and a complete overhaul of the Lord-Governor. 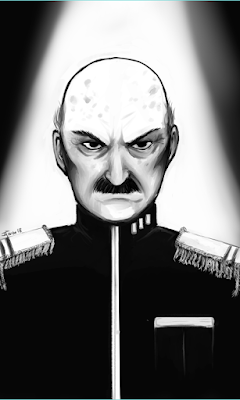 
The biggest thing people will notice is that both the title and person holding it have been changed.

Ard Tiarna translates as 'high lord', in Frozen Skies it is a position held by a clsoe family member of the reigning monarch of the Commonwealth and is appointed to that role. The High Lord of Alyeska is effectively a viceroy, who runs the territory in the name of and as a representative of the Commonwealth monarch. As the monarch's representative, the High Lord performs the ceremonial and constitutional functions of a head of state and holds executive power over Alyeska's own parliament. The High Lord also serves as the commander-in-chief of Alyeska's armed forces, making the post as much a military appointment as a civil one.

The current High Lord of Alyeska is Viktor Cathmore, the uncle of the reigning Queen Lothwyn and was appointed to the position by her father during his own reign. The fact that the Queen lacks any siblings was a big influence in Viktor remaining in the role when Lothwyn ascended to the throne, thus giving raise to a situation where the de facto 'king' of Alyeska has ruled longer than the actual sovereign of the Commonwealth. The extra time Viktor has had in the role has allowed him to cement his position and many suspect that he will not easily step down if Lothwyn chooses to replace him.

As Lothwyn has yet to take a husband and bear any children, Viktor is currently the heir presumptive and stands to inherit the Commonwealth throne when Lothwyn passes unless she ends up having children. This potentially sets Viktor up as one of the most powerful men in the Commonwealth and somebody who has much to gain if anything...unfortunate happens to his niece.

Viktor is known to be a stern man and is widely suspected to have built up a circle of supporters in both Alyeska and the Home Isles. He is also a skilled fighter and practices with the blade daily.
Posted by Stephen 'Stormwell' Hughes at 06:00