Been toying for some time with the idea of a British supernatural/horror setting, but so far I've struggled with a way of making it stand out. Recently I believe that I've finally cracked it; One location (a fictional English county) but with the option of different time periods.

Basically means that a game in the setting can be set at any period throughout history, from Roman and Medieval times through the Victorian period to the World Wars and 21st Century. 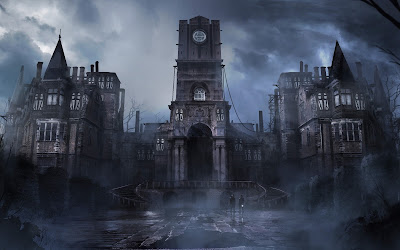 Overview: The Gwentshire Chronicles is set in the fictional English county of Gwentshire, which is analogous to the northern part of Somerset.

This part of England in real life has always had bit of a weird and mystical reputation going back to prehistoric times, stone circles and Glastonbury Tor being the prime examples. Within the Gwentshire Chronicles, the supernatural is going to have a strong and forms a sort of 'mythos' based round the county of Gwentshire. There will be key elements of the Gwentshire mythos thats consistent across the various different time periods, but other elements will change to reflect specific periods. Dark creatures may terrorize lone farms and villages at night, but gradually these creatures will retreat into the hidden and forgotten places as the domain of Man expands outwards.

As for the mythos itself, I have a couple of ideas.

The first is the demonic or spectral entities known as 'black dogs' found primarily in the folklore of the British Isles. Some are said to be harmful, others guide and protect wayward travelers. There is going to be a black dog in Gwentshire known as 'Grim Jack', usually regarded as an omen of death. Though Grim Jack would be known to fight evil spirits, its unclear whether he's good or evil as he does not go out of his way to protect people. He is, however, known to hunt down people who commit crimes such as murder within the borders of Gwentshire and would otherwise escape justice.

The other idea was creatures, or even entities, known as the the 'mist-bound'. Running with the idea that mist is common in Gwentshire regardless of the time of year, generally there is stuff that reside in it. Thinking that Gwentshire is actually a weak point in the wall that separates our world from the spirit world, meaning that things slip through (hence all the supernatural stuff). The mist-bound are actually sort of guardians or sentinels, basically trying to prevent stuff slipping through. Due to human activity disturbing or even destroying certain sites throughout the county, the mist-bound's power gradually gets eroded and so they're forced to let the smaller stuff through so they can focus on the much bigger threats.
Posted by Stephen 'Stormwell' Hughes at 02:55