Alyeska is a land of ample opportunity; some toil the land for the fruit of the earth whilst others seek precious minerals beneath it. For every soul seeking to make an honest living, there are many who seek to part fools from their gold through dishonest means. Thieves and bandits are a common plight in civilized lands, but there is another kind of scoundrel that is on the raise who uses trickery and deceit to get what they want.

Kaelin Madigan is one such person, using every trick up her sleeve to fleece others out of their heard earn coin. 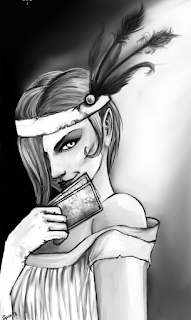 Kaelin didn't have an easy start in life, being born on a Genchi ghetto in the Aldwell District of Lindun. She never knew her father and her mother was killed during an air raid, the ghettos having received no provisions for the safety of their residents. Being orphaned at a young age was bad enough, but being a Genchi she could expect no help from the state for her welfare. The other families in the ghettos looked out for her as much as they could, though food, medicine and even clothes were in pitiful short supply as the Genchi were low down on the rations list.

It wasn't long before Kaelin started stealing food from shops and market stalls; sometimes she'd managed to get away with a loaf of bread, other times she got bruises from irate shopkeepers for her troubles. Through a mixture of trial and error she learnt that she had a knack for subterfuge, using deceit to swipe coins and ration books from unsuspecting victims. She soon put her skills to good use with a street gang, acting as a distraction whilst her fellow gang members went about the actual act of thievery. However, the gang ended up being busted by the law and Kaelin opted to skip town.

By this point the Great Darmonican War had ended and civilian shipping was starting to recover from the long years of war. It proved relatively easy for Kaelin to gain passage to Alyeska, a supposed land of opportunity she'd frequently heard others talk about. Whilst getting to Alyeska proved easy enough, Kaelin found that establishing herself there was another matter entirely. Her good looks had proven useful in the past and proved useful again as she managed to gain work with a certain madame as an escort.

From a string of wealthy clients she quickly learnt the etiquette of high society and useful tidbits from indulging in pillow talk with said clients. Before long she was able to work on a more freelance basis and had access to the few exclusive clubs and casinos that exist in Alyeska. She chooses her marks carefully, making sure that they're inebriated before she approaches them and thus more open to her advances. Later she engages in pillow talk in case her mark lets slip valuable information, then waits until he falls asleep before examining the mark's home. Personal papers, especially those relating to financial matters, she is particularly interested in and she uses a miniature camera to allow her to forge copies later on. She also looks for valuable items that she can secret out of the house and then fence.

Player characters may get hired by one of her victims to help catch her if the victim suspects what she has been up to. The characters may even get approached by Kaelin if they frequent upper end clubs and look reasonably wealthy with the intention of robbing them. On the flip-side, Kaelin may approach the characters to enlist their help with a potentially big score.