As the Gwentshire Chronicles setting idea seems to have been a big hit I've decided to do a follow-up post. Its a general overview of the County of Gwentshire, noting places of interests. It also gives a rough idea of the geographic layout of the county along with little glimpses at its history.

Expect further posts as I explore some concepts for the setting, though people have asked about cross-generational stuff. 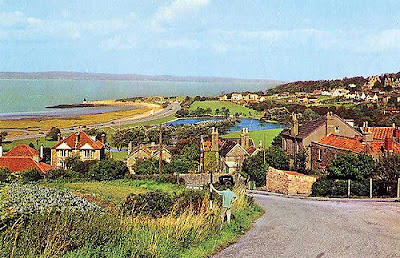 Gwentshire is a small English county located in the South-West of England, close to Bristol.

It is bisected by the River Gwent, which flows north through the county into the Bristol Channel. The county town and administrative seat is the town of Gwentford, straddling the River Gwent in the rough center of the county. Gwentford is home to Moore Barracks, the depot of the Gwentshire Rifles and boasts some light industry. A railway line runs east to west, crossing the Gwent at Gwentford where branch lines split off to serve the rest of the county. Aside from the light industry round Gwentford, the county is rural with flat coastal plains giving way to more hilly terrain the further south you go.

Gwentford Castle - Built by the Normans on the site of an earlier Anglo-Saxon fort. Damaged during the English Civil War and never properly repaired, was used as an army barracks until Moore Barracks was built in the early 1800s. Used as a prison during the latter half of the 19th Century until the so-called 'New Prison' was built in the 1890s. Despite plans to turn it into a museum it stood empty for much of the 20th Century, though was used as a PoW camp in both World Wars.

Potterstead - Main port in Gwentshire and located at the mouth of the River Gwent.

Lombe - Village in the south-eastern part of the county and host to Lombe Hall, the country seat of the Snell family (least up until the 1930s).

Ashenbury - Located south-west of Gwentford, west of the River Gwent and just north of the Weston Hills.

Ashenbury Tor - Sandstone hill close to the town of Ashenbury and nestled in a crook of the River Gwent, site of a prehistoric hillfort that was later used by the Romans.

RAF Ludsgate - Aerodrome built in the 1920s, acquired by the RAF in the late 1930s as part of its pre-WW2 expansion programme.

The Levels - coastal plain and wetland area forming the northern half of the county.

The Weston Hills - Range of limestone hills that dominate the southern half of the county, boasts many gorges and combes as well as a few caves.
Posted by Stephen 'Stormwell' Hughes at 01:41